It will still be a while before the second season of the Umbrella Academy hits Netflix, but supdate from Gerard Way and the cast are making fans feel as if it’s releasing tomorrow.

Following the recent news that season two has begun production, Way and others shared some sneak peeks at the beginning stages of season two.

Read more: ‘Doctor Sleep’ trailer drags you back into ‘The Shining’ world

Way’s photo shows a sign marking the initial script reading for actors in preparation for the new bunch of episodes.

Way provided very little detail on the reading, but is drumming up the hype around his comic book adaptation nonetheless.

Umbrella Academy comic illustrator Gabriel Bá shared his own view of the table reading, sharing an out-of-focus snapshot on his Instagram story. 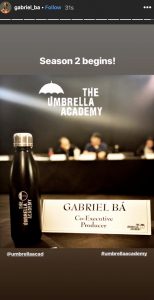 Emmy Raver-Lampman showed off a wall of fan art, taking the time to admire some hard work from fans.

Ellen Page got in on the fun as well, sharing a selfie with co-star David Castañeda.

Aidan Gallagher, who plays Number Five, initiated the excitement by posting an update to social media a few weeks back, letting fans know that season two was well underway.

We learned last month that the series based on the My Chemical Romance frontman and illustrator Gabriel Bá’s series racked up about 45 million viewers in the first four weeks it was available on the platform.

To put that into perspective, similar popular titles like Fyre: The Greatest Party That Never Happened and Our Planet only raked in up to 25 million households viewing each respective show. Netflix considers a “view” when around 70% of the show’s runtime has been viewed.

That means the show has been something of a smash, then, so its creators should be quite proud. That’s probably part of what went into the decision to renew the show for a second season, after all.

When do you think season two will be complete? Sound off in the comments below!