The Wonder Years recently kicked off their Halloween Extravaganza run where the band performs two sets for fans every night. One set consists of TWY tracks, while the second includes full costumes and a cover set.

After dressing up and covering Queen during last year’s run, fans were left wondering what this year’s event would bring.

Throw your hands up ladies and gentlemen, Limp Bizkit are now taking the stage.

This year, The Wonder Years are taking the stage dressed up as Limp Bizkit while performing some of the band’s hit tracks.

You can check out some footage from the shows below!

Cant believe I got to see “Limp Bizkit” open for @thewonderyears tonight! pic.twitter.com/aJ93aZ2jig

Of course, fans really seemed to enjoy the night. According to those in attendance, Homesafe dressed as Weezer while Future Teens donned Carly Rae Jepsen outfits.

“My favorite holiday is the one where you get to be somebody else.” | @futureteensusa as Carly Rae Jepsen, @homesafeIL as Weezer (featuring @PatEganMusic), and @thewonderyears as Limp Bizkit. pic.twitter.com/0xX1CfMptz

You can catch the remaining Halloween Extravaganza dates below! 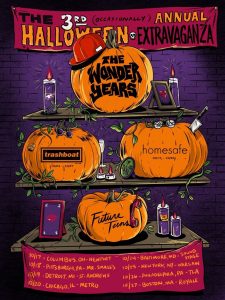 Will you be attending The Wonder Years’ Halloween shows? What do you think of the band’s Limp Bizkit covers and costumes? Sound off in the comments below!