The Wrecks frontman Nick Anderson has released a video apologizing again for “insensitive jokes” he made last year while on stage and explained his “growth process” since.

Last November, Anderson made comments on stage regarding Nazis, abortions, and miscarriages.

The singer previously made two apologies when the incident occurred, but has remained fairly silent for the past 11 months or so.

In the new video, he starts by playing videos of the jokes for context.

In case you forgot, the footage in question starts out with Anderson asking the crowd to take a small step back to prevent fans from getting smashed up against the barricade.

It then turns into the frontman asking those at the show to pretend one fan is pregnant, stating “later in the show I’m gonna tell you to push forward and she’s gonna have an abortion by accident.”

Another video, surfacing from the same show, shows Anderson doing the Nazi salute while fans cheered. He later says, “What you doing? No, no. Don’t you see what I’m doing you fucking Nazi fucks?”

He talked about his initial apology that night which was “hasty,” he says. To refresh your memory, he tweeted an apology that stated the following:

“I made a few insensitive jokes on stage last night. I wanna apologize to those who may have been offended. Obviously I have a very sarcastic sense of humor (shown in every video we release) and it’s never meant to hurt or offend, but last night was foolish. I’m sorry. Love y’all.”

He also added that he took the joke from Bo Burnham and that his actions “did not come from a place of malice.” 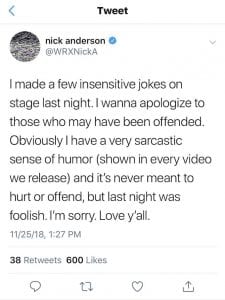 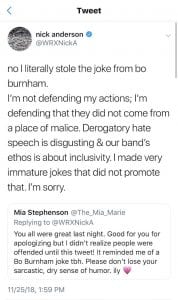 “I completely missed the point with that apology,” he said in the new video. “I didn’t realize at the time i was basically normalizing the behavior of racism and anti-semitism.”

He then talked about his more in-depth “overdue apology” that you can read below.

An overdue apology.
I know that this issue has gone quiet, but it’s important that I address it properly. pic.twitter.com/Sflmp2vaoi

Anderson then started talking about a joke that wasn’t included in the viral videos but that he still felt the need to apologize for.  The joke was regarding him talking about his fan base being primarily comprised of white people and not being diverse. This came after he made a joke while dividing the crowd in half, referencing segregation.

He said after the show, a black woman approached him to let him know that she wasn’t offended by the joke. Anderson said at the time, this made him feel better about the situation, but now understands that it brought up some red flags. He said someone shouldn’t have to be made to feel uncomfortable for being different and feel the need to let him know they didn’t feel offended by a joke.

“Those jokes have no place in music or at concerts or where it’s supposed to be a safe place,” he said in the video. “I am sorry and that these are things that I learned from and I take very seriously. … It’s something that has been on my mind since it happened.”

You can see Anderson’s full update video below.

A recap, reflection, and recognition of the tasteless jokes I made on stage last year, why my reaction was the wrong one, and how I’ve learned from it over the past 11 months.

I know it’s long, but I ask that you please watch ’til the end. pic.twitter.com/9j8ExW3vHk

Last month, the Wrecks revealed they’d be returning in 2020 with a new album and live shows. You can see their announcement post below.

Introducing, The Wrecks 2020. Where an album exists, wrx tours are back, and all is right in the world. See you there. ? pic.twitter.com/u9vnBcLTNi