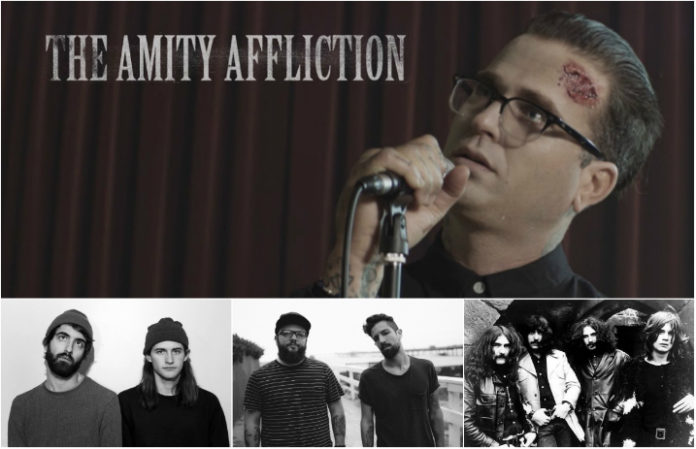 Watch new music videos from The Amity Affliction and Envy On The Coast—plus, don’t miss Cage The Elephant's new album.

Read more: Hatebreed release “Seven Enemies” video and other news you might have missed yesterday

1.  The Amity Affliction release video for their cover of The Weeknd's “Can't Feel My Face”

2. PVRIS' Lynn Gunn wrote a letter in support of the LGBTQIA+ community on Billboard

Gunn joins other arists including Panic! At The Disco's Brendon Urie and Halsey who have written letters in support of the LGBTQIA+ community for Pride Month. Read an excerpt of the letter below and the full letter here:

I came out to my parents when I was 18 years old. I left a letter under my mother’s pillow, gave her a kiss goodbye and then embarked on my first tour ever. I remember sitting in the back of a van headed to the abyss of the open road, fearing for my life. Ever since, my time has been swept up by life on the road performing with my band as an openly gay front woman.

Read more: Seems one of Twenty One Pilots’ hometown shows is creating chaos

3. Envy on the Coast release new single with “Sift”

“Sift” comes from Envy On The Coast's upcoming EP, Ritual. You preorder Ritual here. Ritual will be released through June 30 via Equal Vision Records.

This amazing box set includes every Black Sabbath from Black Sabbath to Never Say Die! along with plenty of Black Sabbath collectibles that any hardcore fan would want such as a reprinted tour poster from their performance at the Seattle Centre Arena in 1972 and a crucifix-shaped Black Sabbath USB stick that features high definition audio of the first eight Black Sabbath albums.

You can preorder The Ten Year War here.

“Man Of War” is the second unreleased track revealed before OKNOTOK 1997-2017's release tomorrow. Radiohead released “I Promise” on June 2.

Pre-orders for OKNOTOK are available now.

Vocalist / guitarist Matt Shultz commented on the inspiration of this new album saying, “Many times you’re adding sonic layers looking for something to hide behind, and what you don’t realize is that that vulnerability and that nakedness might be the most compelling and interesting thing about the song.”

Unpeeled will be released through RCA Records on July 28 and can be preordered here.

Read more: ‘Metal Cats’ is the purr-fect coloring book for the feline-loving headbanger

This “one-take” alternate version of the video was recorded to celebrate the fact that the original video recently surpassed 1,000,000 views.