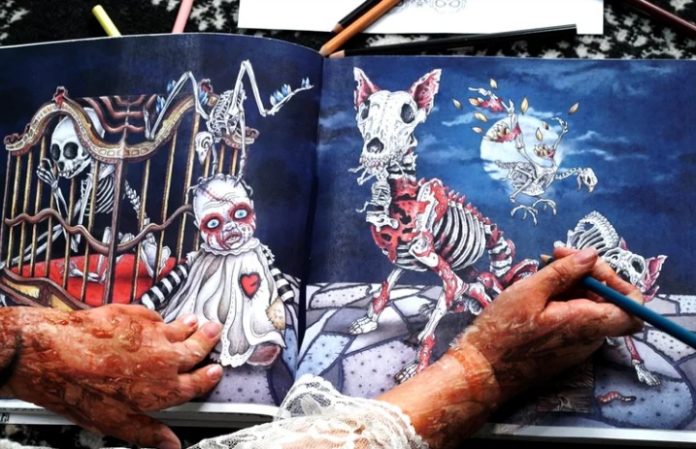 Coloring is a wonderful way to keep your brain fit and relieve stress for both kids and adults alike. But this new coloring book terrifically morbid, and visually awesome. See the trailer below!

The Beauty of Horror 2: Ghouliana's Creepatorium – Another GOREgeous Coloring Book is the follow-up by Alan Robert, whose first volume became a number one best-selling adult coloring book that gained critical acclaim.

Robert is the bassist and songwriter in the band Life Of Agony, and he carries on his story of Ghouliana, an undead girl “mischievously attempting to trick budding colorists into unleashing her deadly spell” in his sequel.

The Beauty Of Horror 2 features 80 pages of Robert's hand-drawn pen and ink illustrations, and the pages are promised to be high quality so that your ink won't run through.

“Bringing Ghouliana to life on set was such an incredible experience,” Robert says regarding the books new trailer. “I think it just may be the beginning of seeing her in the flesh!”

The coloring book comes in partnership with IDW, a media publishing company which produces a wide variety of content which also includes Robert's initial book, The Beauty of Horror.

“Alan has topped himself again,” says IDW VP of New Product Development, Jerry Bennington. “Not only is the coloring book twice as creepy as its predecessor, but the trailer ups the chill factor to nightmare-inducing levels to satisfy horror fans everywhere.”

The Beauty of Horror 2: Ghouliana's Creepatorium – Another GOREgeous Coloring Book will arrive in book stores and online this September. To find more details, have a look at the coloring book's official site.

Check out the chilling trailer for Robert's even creepier sequel here.

The Beauty of Horror 2: Ghouliana's Creepatorium – Another GOREgeous Coloring Book by Alan Robert from Alan Robert on Vimeo.