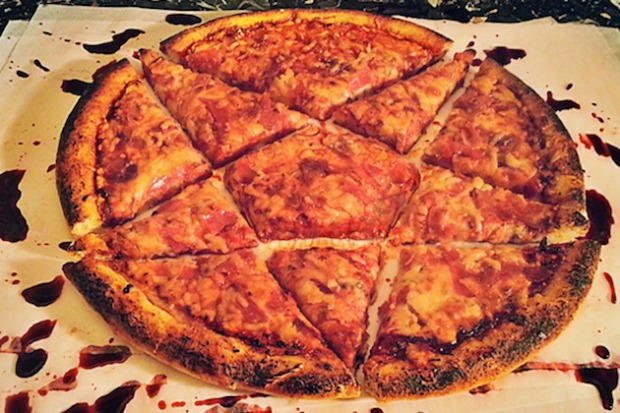 Pizza-obsessed pop-punk fans just got outdone. John Hurkes, a chef at the Bulldog N.E. in Minneapolis, has worked to create the most delicious celebration of metal: a Slayer pizza. The pentagram-shaped pizza uses Slayer’s 1986 album, Rein In Blood, as inspiration and is decoratively splattered with fake blood (altar wine gastrique).

The ingredients include Chopped Fra Mani toscano, soppressata, finocchiona, Cypress Grove “Lamb Chopper” cheese, house marinara, signature communion wafer crust and the above-mentioned altar wine gastrique. You can check out a full description from the chef below via food blog Rice And Bread:

“Behold, the Slayer pizza. A vast sadistic feast, the only way to eat it is going piece by piece. The flour was stone ground from 350 communion wafers and kneaded together on an altar of sacrifice. It’s baked at a chilly 400 degrees and finished as the communion wafer crust starts to burn. These delicious ingredients were almost all purveyed from California, where it is said that thrash metal has its roots. As the pizza is sliced and “Angel of Death” is unleashed, you will scream along with the first taste. The smooth tang of the sheep’s milk cheese is offset in quintessential madness with the handcrafted salami. Like Jesus on the cross, heavy guitars rip through meat and cheese, exposing the unholy red sauce underneath. With the whirlwind beating of drums and those classic Slayer riffs, the pizza is soaked with a torrential altar wine gastrique. Raining blood from a lacerated pie! It should take just under 30 minutes to finish, and with six and a half years worth of communion bread servings you might want to share it with your friends.”