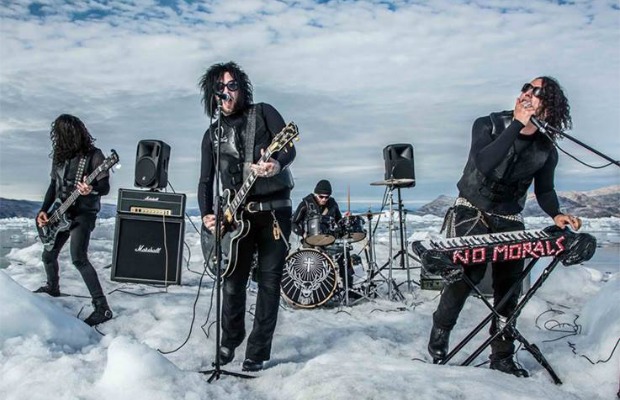 U.K. metal band the Defiled recently went to the town of town of Kulusuk, Greenland, to play a gig on top of a floating iceberg. The band’s Facebook page elaborates on the event:

“The Defiled turned a gigantic Iceberg into the most unlikely of gig venues in the Greenland Sea recently when Jägermeister Music UK invited the band to perform on top of the floating platform for the Jägermeister Ice Cold Gig – which sees artists put to the test as they perform in unconventional, ice cold conditions. Braving freezing temperatures and fast flowing ice, the group performed the special set to a host of locals from the nearby town of Kulusuk, who ventured out to the ice field to watch this once-in-a-lifetime experience from an array of fishing boats and leisure craft.”

The Defiled frontman Stich D had this to say about the icy gig:

“This has to be one of the most insane gigs we’ve ever played! You see these things on TV documentaries but it’s not until you get to see them in real life that you realise just how big and amazing icebergs are. Although it was cold, I don’t think any of us noticed once we got started as the stage location literally takes your breath away. As a group of mates we’ve shared some amazing experiences together but this has been an adventure that has bought us closer together and something that we all feel really privileged to have been part of. We’ve made a lot of friends during our short stay here and donated some music equipment to the local people, so we look forward to coming back one day and playing a joint gig out here next time – maybe thefirst ever gig with two bands playing on two icebergs at the same time!”

Check out the video below. The band released their second full-length album, Daggers, in 2013 via Nuclear Blast Records.