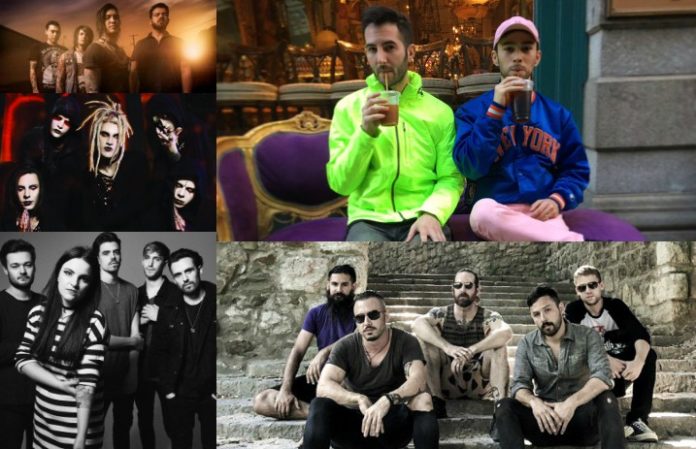 It's Friday! Celebrate with a new video from Max, plus new tour dates from Dillinger Escape Plan. Check out all of today's news below.

Read more: The 1975 show off their criticisms and other news you may have missed today

Max releases a trippy new video with his side project Party Pupils.

Max announced on Twitter that he's teamed up with Ryan EXOE to create an electro-funk band called Party Pupils. The duo released a video for their cover of the popular song “Pony.” About the video Max says, “This is probably one of the craziest videos we've ever made so we hope you enjoy it as much as we enjoyed making it.”

After a terrible bus accident, DEP had to cancel all remaining dates of their tour. But the band has announced new tour dates for those they could not play.

Dead Rabbitts premiere video for “Burn It Down.”

The song comes off of their forthcoming album This Emptiness out April 14 on Tragic Hero Records. You can preorder it here.

The Essex pop-rock band will release the five-track EP on May 12 on LAB Records. The first single to come off of the EP is “Powerlines” and they'll be dropping “Give Me A Chance” in March. They're also heading out on tour starting April 18.

Davey Suicide have released the official music video for “Too Many Freaks.”

The song features Juggalo duo Twizitd and comes from the band's upcoming album Made From Fire out March 24. You can preorder the album here.

The song is on the band's upcoming self-titled album out March 17 on Equal Vision Records. They'll also be setting out on a spring tour starting March 11 with Mylets and Icarus The Owl . Preorders for the album are available here.

Watch more: APTV RECAP: 8123 Festival ft. THE MAINE, A ROCKET TO THE MOON, THE SUMMER SET, and more