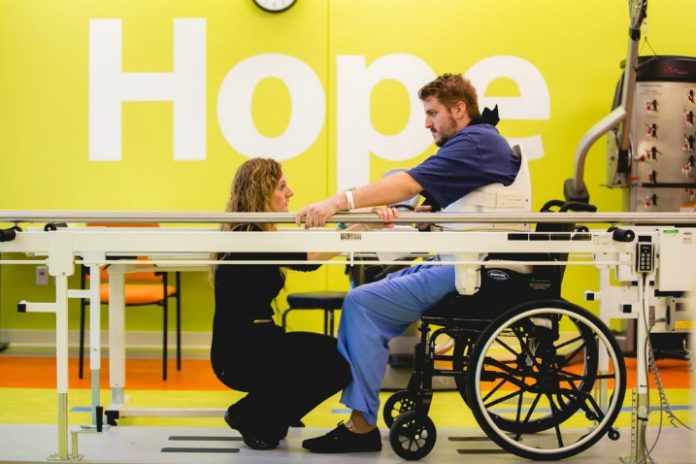 Drummer Andrew Tkaczyk has seen the worst over the past few months. After a head-on tour bus collision with a semi-tractor trailer that left both drivers dead, Tkaczyk and his fellow band members in the Ghost Inside were flown to El Paso for emergency surgery.

Now, a coma and leg amputation later, Tkaczyk wants to get back on his feet and, most importantly, behind the kit.

Read more: The Ghost Inside drummer released from hospital after losing leg in tragic bus accident

Tkaczyk is now working towards as full a recovery as possible at a rehab hospital in Michigan. “When I first got here I could barely move my hand and my leg was in worse shape and I was just laying here and couldn’t do much,” he said to Local Spins. After five weeks there, he's now able to stand and pivot.

WIth his types of injuries, playing the drums again will be a challenge, but he's determined to get back on stage: “One way or another, I’m gonna figure it out. I have a long road of healing and recovery, but one way or another, I gotta get back to it because I don’t know anything else,” he said.

It certainly won't be easy, but Dr. Stephen Bloom, medical director of trauma at Tkaczyk's recovery center, insists that it is possible. “It’s going to involve custom-made prosthetics for his right leg that will have to be adapted for his kick pedal…There’s wonderful drummers with disabilities out there who have adapted to this,” said Bloom to Local Spins.

In the wake of the accident, the band's subsequent GoFundMe page has racked up over 150 thousand dollars, while Epitaph Records has donated all record sales to the band's recovery. Singer Jonathan Vigil is working to walk again, while guitarist Zach Johnson has had multiple toes amputated.

“It’s been eye-opening. It’s made me look at life differently and not take those little things for granted…I’ve been trying to have a positive attitude towards it and not get down, cause I don’t think that helps in a situation like this,” Tkaczyk said to Local Spins.