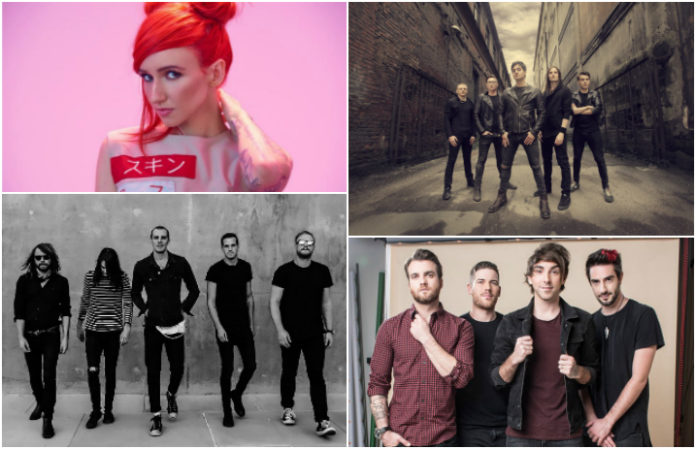 Catch the Maine on tour—plus watch a new music video from In Her Own Words and Forget My Silence. Check out the news you might have missed today below!

Read more: Brendon Urie and ‘Kinky Boots’ release shirt and other news you might have missed today

1. The Maine have announced a UK and Europe headlining tour. Check out the list of cities and dates below!

The band are touring in support of their new record, Lovely Little Lonely, and Night Riots and the Technicolors have been announced as support.

2. In Her Own Words have released a new music video for “Strangers.” Give it a watch below!

The track is taken from their 2016 album, Unfamiliar.

Read more: Remember when Panic! At The Disco, Fall Out Boy members formed a band?

3. All Time Low have announced a surprise project with the help of some fans.

We recently reached out to a few of you to help create something special. Keep checking https://t.co/jcfOKwMoAI to see it all come together!

They announced “Project ATL” and have already posted a few photos from fans. Stay tuned for more from the special project!

4. Forget My Silence released a music video for their track “Fall To Rise.” Give it a watch below!

“Fall To Rise” is the title track off their forthcoming album.

“The title holds the history of my life and our band. We are all working on ourselves to get better at what we do. Not always was everything perfect, we faced many fails and hard times, but they only made us stronger and actually made us better,” vocalist Roma Sadygov says. “'Fall To Rise' is story of how people who step over, will fall against those who have already fell before and learned their mistakes, and by their turn they will rise again, only stronger, and they all keep the circle of falling and rising going. This song will be kind of the beginning of new chapters in our story.”

Read more: The 1975’s Matty Healy talks addiction and how much he hates the indie scene

5. Lights has released a clip of a new song. Give it a listen below!

The caption reads “Old radio from generations ago. Still works a bit…” Lights has been releasing teasers as an awesome scavenger hunt for fans to learn more about the Skin & Earth world behind her new comic book series, as well as her music.

Old radio from generations ago. Still works a bit…

Watch more: Actors, musicians, comedians go back in time for a good cause at Strange ‘80s—watch