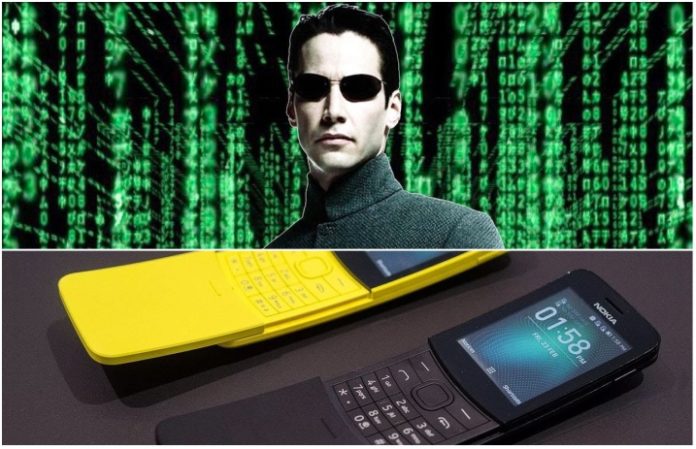 [Photos by: Warner Bros., The Verge/YouTube]

Nokia is getting nostalgic with the reintroduction of their 8110 slider phone, a distinct piece of mid-'90s technology made eternal by an appearance in the Wachowskis' sci-fi blockbuster The Matrix. Are you ready to follow the white rabbit with a Neo-style, throwback cellphone?

Read more: Will the iPhone X be discontinued in 2018?

The new/old phone, the Nokia 8110 4G, is being revived by current Nokia rights holder and Finnish tech company HMD Global, as reported by Forbes. As an alternative to high-end smartphones, you'll soon be able to own the same mobile device that Keanu Reeves (as hacker-turned-savior Neo) drops off the edge of a skyscraper in the 1999 movie—revisit that pacesetting scene below.

Of course, it won't be quite as rudimentary as the original 8110 (first introduced in 1996, a decade before smartphones were a thing), although its outward styling still recalls Neo's deep dive into a malignant dystopia shrouded from society. The phone will reportedly feature 4G along with apps like Facebook, Twitter, and more. (Plus, it'll come with the classic Nokia mobile game Snake!)

“The Nokia 8110 comes with the craftsmanship you expect from a Nokia phone, delivering durability and reliability as standard,” HMD say of the phone, as covered by the NME. “With a familiar and easy to use interface, it features intuitive tactile mechanics, with slide to answer and end calls, as well as an addictive helicopter style spin on its axis.”

The revived Nokia 8110, available in black or banana yellow, is set for release this May. Unfortunately, it won't come with a red pill or a blue pill—you're going to have to fight your way out of the machines' dominion on your own.

Check out The Verge's Nokia 8110 video after the movie clip: