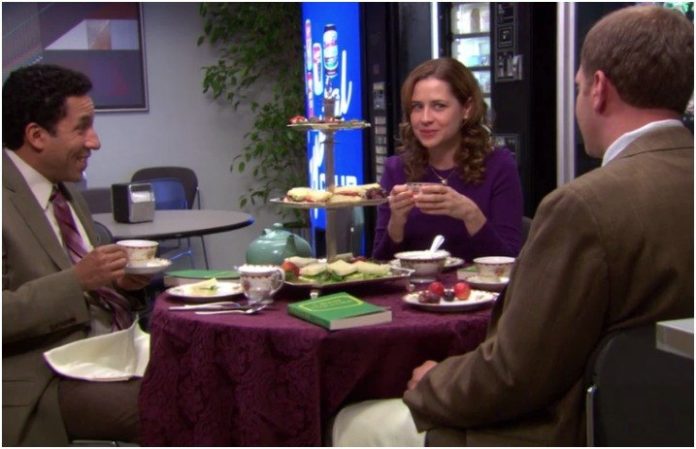 Jenna Fischer, Oscar Nunez and Paul Lieberstein got together to bring us back to a “time of refinement and civility,” and this time they brought with them a new addition to the Finer Things Club.

Read more: Watch this hilarious mash-up of ‘The Office’ and ‘A Quiet Place’

It’s been a while since we’ve been able to see the members of the most exclusive club in The Office history get together, but on Wednesday afternoon fans of the popular sitcom were able to rejoice in what could possibly be the best reunion ever.

The reason for the reunion was to promote the Finer Things Club merchandise that Fischer created to help benefit Miry’s List, a nonprofit organization that provides refugee families a safe haven in the United States with supplies to start their new lives.

Final sales for the exclusive merchandise end Thursday night, so Fischer decided to reunite the original club members, plus Ed Helms to celebrate the occasion.

“Finer Things Club Reunion!!!” she wrote on a Instagram post attached to a photo of her fellow co-stars. “The charity drive inspired us to get the whole gang together – and, in the spirit of giving, to finally allow Andy to join. We had a great lunch. No paper, no plastic. AND, everyone signed the giveaway merch!”

Of course, the addition of Helms is something new to the Finer Things Club. As fans of The Office might remember, only Pam, Toby and Oscar were official members of the club. After realizing the club was the most exclusive in the office, Andy made it his mission to join, but Pam eventually turned him down by saying it was “a closed club.”

It’s been a few years since we were first introduced to the Finer Things Club, and our hearts are so full now that Andy has officially been accepted into the club. Helms even shared the photo, saying, “Thanks for rounding up the crew, Jenna – Such a fun hang!!!”

While we're so excited about Andy finally joining the club, that doesn't mean we have forgotten one member's noticeable absence.

If anyone was curious as to where Jim was during this exclusive reunion, don't worry. Fischer explained the reason for his absence on Twitter by saying: “He didn't read Angela's Ashes and he made too many jokes (according to one person) so…sadly, he was not allowed back in the club. We wish him well.”

He didn't read Angela's Ashes and he made too many jokes (according to one person) so…sadly, he was not allowed back in the club. We wish him well. https://t.co/OkbYqWza0m

Check out the reunion photo below:

Finer Things Club Reunion!!! The charity drive inspired us to get the whole gang together – and, in the spirit of giving, to finally allow Andy to join. We had a great lunch. No paper, no plastic. AND, everyone signed the giveaway merch! Yay! Just a reminder the sale ends Thursday night. www.represent.com/jenna We have 2 shirts and one sweatshirt signed by the entire gang to giveaway – any purchase makes you eligible to win. (Swipe to see.) Love these guys!! @edhelms #paullieberstein #oscarnunez #finerthingsclub #officereunion