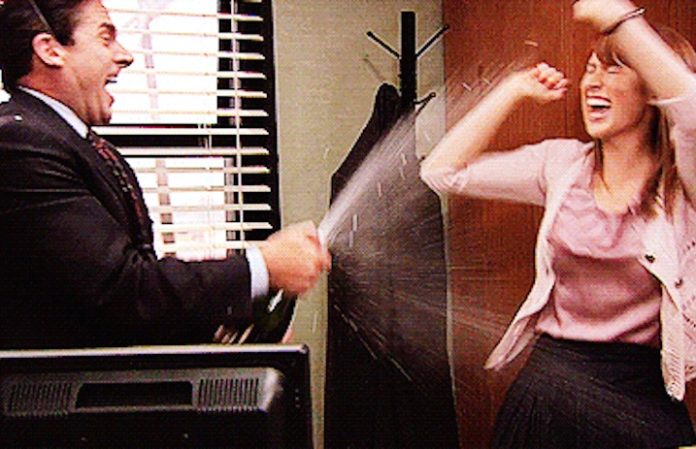 You might want to sit down for this one. Are you sitting now? OK *takes a deep breath* —

THE OFFICE COULD GET ANOTHER SEASON.

Following the Will & Grace revival, NBC is considering bringing back Emmy-winning The Office. But to be clear: A deal is not currently in the works.

“We often talk about The Office,” NBC Entertainment chairman Bob Greenblatt told Deadline at the Television Critics Association (TCA) press tour. “I’ve talked to Greg [Daniels, creator] four times over the past few years. It’s always, ‘maybe some day but not now.’ There is certainly an open invitation but we don’t have anything happening right now. If he wants to do it, I would do it.”

Greenblatt continues: “It’s not an easy thing to crack [a revival], expectations are so high and you’ve got to get it just right… We’re not thinking anything beyond Miami Vice [at the moment]… If Tina called and said ‘I’d do 30 Rock,’ I’d do it in a heartbeat, even for a limited run. The same about The Office.”

And who wouldn’t want it to come back? With plenty of Office-related Instagram and Twitter fan accounts floating around, the comedy series starring Steve Carell, Rainn Wilson, John Krasinski, Jenna Fischer, Mindy Kaling and many others, has a definite cult following of passionate fans.

In other words, everyone wants this to happen. Well, everyone except Carell.

In an interview earlier this year with New York Daily News, he said he wouldn’t return to the show: “I don’t think it’s a good idea. Fans of any show think that they want to see more of that show but I don’t really (believe) that’s the case, because they want it to be exactly what it was, and there’s no way it can be exactly what it was. Even in the best possible scenario, it’s always a slight disappointment. I don’t see any reason to slightly disappoint people who might have loved your show to begin with.”

So while it’s just in talks, we can still celebrate the thought of it, right?

We love you The Office, and we miss you. Hope to see you soon (on Netflix).

What do you think: Should NBC revive The Office?