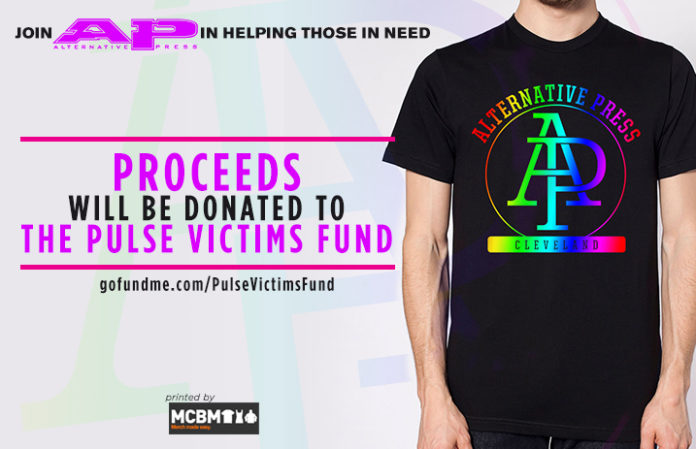 A lot happens online in our scene each week. In an attempt to capture what you might have missed, we’ve gathered up noteworthy internet moments and packaged them in one convenient post every weekend. Check out this week’s recap below!

Help us give back to the victims of the Orlando mass shooting: https://t.co/OqvKHb8Zit �� pic.twitter.com/prSMaDyowK

Here’s the back! #LoveIsLove pic.twitter.com/IOAL7YfXrl

Our hearts go out to everyone in Orlando. To support the Pulse Victims Fund we’re bringing back the ‘Girls Girls Boys Pride Shirt’ for a limited time on @Teespring (link in bio). You’ll be able to pick one up at tonight’s show in Tampa, and at the shows coming up in Charleston & Charlotte. You can also donate to the Pulse Victims Fund on gofundme.com/PulseVictimsFund

They are here. Let’s sell them all out tonight!! All proceeds go to charity. pic.twitter.com/wjuLByAXeo

Donating all the proceeds of this tee to the Pulse Victims Fund. https://t.co/WnUdPSba4x pic.twitter.com/8HTEuUb2gL

All profits will be donated to the Pulse Victims Fund. Order here: https://t.co/q0qfcvUItI pic.twitter.com/DpQL7SyNRt

To Write Love On Her Arms

Rainbow Title. Because hope and help are for absolutely everyone. https://t.co/Vg809siLfE pic.twitter.com/EBe0KDDbP6

To Write Love On Her Arms are also fundraising for grief counseling in Orlando:

49 artists joined forces for Forever Beautiful: A Collection Of Love For Orlando, a benefit compilation for OneOrlando:

Forever Beautiful – A Collection of Love for Orlando #SongsForOrlando https://t.co/BKfYW7Tt4i

“Forever Beautiful” Songs for the victims in Orlando. Donate what you can! “Weave Me” live https://t.co/HMogEUL9GU �� pic.twitter.com/s4Tx4Se8yL

Forever Beautiful is a compilation of songs to raise money and awareness for the recent tragedy in Orlando https://t.co/UN3h7LAQJN

Forever Beautiful is a compilation of songs to raise money/awareness for the victims of the tragedy in Orlando. https://t.co/no44KqhzF6

Contributed a song to this amazing comp. All proceeds will be given to Orlando https://t.co/SzEwYowCkO pic.twitter.com/asFY6N8tMt

49 for the 49 beautiful humans we lost in Orlando. Pay what you can, please spread the word. https://t.co/wC59X7MRQk pic.twitter.com/6auLpxpXMz

Please give what you can to raise money for the families and victims of the tragedy that occurred in Orlando. https://t.co/DD5iiqXd07

We’re honored to be a part of this. Love will find its way into all things if we let it. https://t.co/OF9XlqJOOA
�� pic.twitter.com/QPbpnfrA34

Very excited to be a part of this comp. Proceeds go to Orlando victims ❤️ https://t.co/Z2FVmsKsma

We’re honored to be part of such a good cause. ❤️��������https://t.co/uozoLfMIWt#SongsForOrlando pic.twitter.com/L9eukb4fRB

Proud to support @SongsForOrlando, a compilation that is now available: https://t.co/TKFMT2QKw2
Give what you can. pic.twitter.com/XV5tbmi0xZ

While we’re at it, here’s another Pulse comp. @Bandcamp‘s album of today & a perfect intro to Orlando’s indie scene https://t.co/mlUf5AMIHu

We contributed an unreleased BSide, “Dust Collector”, to this compilation supporting the LGBTQ community of Orlando. https://t.co/kX71tAZIKV

Panic! At The Disco planned a blood drive before their show in Miami:

.@my1blood will be out front Bayfront Park Amphitheater Tuesday before the show from 3-7pm https://t.co/gbdIxakU8E pic.twitter.com/MIU0PwXsMo

You Blew It! immediately dropped an EP titled Pulse, supporting Center Orlando, a LGBT center providing counseling for those affected by the shooting:

Happy #FathersDay to all the dads out there! hope you’ve been spoiled rotten…#Cooldads

To all the Dad’s who are on the road today I wish you a special father’s day. It’s hard being away, but we do what we do, for our families.

Happy Father’s Day to all the awesome dads out there! ����

Today is Father’s Day. A special holiday where we commemorate the invention of cargo shorts. Also, please don’t change the thermostat.

tell your dad(s) you love em you ungrateful kids.

Cameron Hurley, We Are The In Crowd:

Maxx Danziger, Set It Off:

He was a skater dad / she said see you later dad

Happy Father’s Day to our one and only @DerekSanders! pic.twitter.com/ZO5z16A1Na

Happy Father’s Day Geoff. You’re the band dad Otto and I could never be.

Who was the Best Dad?

Happy Fathers Day to my Dad, and the other 3 men who raised me: Mark, Tom, and Travis

Happy Father’s Day to all the dads out there. We love ya pic.twitter.com/MySKnYUMxI

Brendon Urie, Panic! At The Disco:

Happy Fathers Day to this amazing guy. Thanks for always supporting me in my ventures and weird hobbies and for showing me even cooler ones to try out. And for introducing me to some of my favorite movies of all time. Love you, dad.

Happy Father’s Day to Papa Bowen! If it wasn’t for him, I wouldn’t be doing what I love for a living. Thanks for teaching me to play drums when I was a kid & for letting me follow my dreams ❤️

3. Jack Barakat’s birthday bash at his new bar, The Riff

Come to my birthday party this Friday at my new bar in Hollywood! 21+ first come first serve. I’ll be naked. pic.twitter.com/sgSiEm8Vx3

Jack had so much fun at our Album Release Party he decided to buy the bar and call it The … https://t.co/euNNfqF2Oi pic.twitter.com/W9EUKiWnn9

All your favorite 90s and 2000s Bar sing alongs provided by me! https://t.co/4SFEdxXoPJ

@brianlogandales thanks for joining me on this journey

See you on the other side https://t.co/BZssLtRZSA

And of course, photos from the birthday bash:

4. Bands gear up for this year’s Warped Tour

Join us this summer on the @VansWarpedTour for our last shows of 2016! pic.twitter.com/uJpeLyq5EN

Going over the @VansWarpedTour set. Gonna be full of jamz pic.twitter.com/8V45jQb5It

warped tour is so close I CAN ALMOST TASTE IT pic.twitter.com/ahxsd03oz3

Warped tour is so close I can feel it. Then again everyday feels like warped tour here in Florida! SO STOKED.

Every time I sweat it reminds me of Warped Tour. Wow, what a great summer it will be.

Talking about merch, did you see this exclusive donut T-shirt inspired by APTV’s one and only Nick Major that will be at our tent this summer?

We’ll have EXCLUSIVE MERCH at our tent on @VansWarpedTour! Snag a @Nick_Major “Major Issues” shirt only on Warped! �� pic.twitter.com/hIlXRdg3M8

5. Remember the person who bought a trip to the Galapagos with Weezer singer Rivers Cuomo? They’ve revealed their identity. Turns out it was Rainn Wilson from The Office the whole time.

Their identity has remained a mystery until recently when they came forward to claim their trip to the Galapagos.

Find out who took that Greyhound ride with @RiversCuomo on @funnyordie https://t.co/P3NSxX9nat

6. The Maine announce their covers Side B EP, which will feature the band covering Drake, Rihanna, Justin Bieber and Shania Twain.

7. Our Last Night are embarking on a video cover series called Decades Of Covers.

We are proud to present a new Cover/Video series called Decades Of Covers! Check out the announcement video here. https://t.co/lC7uyXEcqS

8. Beach Weather are teasing us with what seems to be a new music video.

9. Jack Antonoff thanking those were apart of the music festival he began Shadow Of The City, including Frank Iero and the 1975:

thank u to the amazing fans that make this festival something the matters so much. people came from as far as Australia. I mean fuck

10. Benjamin Langford-Biss from As It Is with the tweet of the year.

The world was a much better place when MCR were still a band.

We had our first band practice pretty much 4 years ago today. I still can’t comprehend everything that’s happened since then

12. Yellowcard throwback to them writing their album Lift A Sail.

13. New Found Glory found a Warped Tour setlist from 15 years ago. Look at that lineup!

Check out this Old @VansWarpedTour Schedule From 2001! Insane line up! So crazy that was 15 years ago! pic.twitter.com/Voc5xFGTLI

Hey, big shout out to everyone who bought buttons from our online store!!!! All proceeds were donated to second life bikes in Asbury Park. We also bought this sweet bike ourselves to cruise around on! @secondlifebikes Happy Wednesday

15. Beautiful shot from Adam Elmakias of All Time Low’s Alex Gaskarth and his wife, Lisa, at their wedding a few weeks back.

Just married. Sorry but Alex said I can post as many as I want . Shot with @ILFORDPhoto pic.twitter.com/HI2heDEmfi

16. Jess Bowen of the Summer Set, Jenna McDougall of Tonight Alive and Woody Woodrow of Our Last Night hanging out.

I kinda really enjoy these humans.

“Everything we desire is contained in following our excitement” …cosmic hangs with my soul sister @jenalive11 �� pic.twitter.com/gTX5BasTBq

17. Hannah Hermione of Creeper with the relateable tweet of the week.

I’ve just eaten so much pizza I look like this. pic.twitter.com/9ED2mA6rNA

18. I The Mighty stopped by the AP offices this week, and they found our alt pets!

Hanging out at the @altpress office this morning playing with all the pets. #altpress #altpets #altpups pic.twitter.com/LxZCV4vEPs

19. With Confidence messing around with ROAM.

Helping take out the trash at the Hopeless office @ROAMse pic.twitter.com/AlTdVay8LP

What’s your favorite moment from the past week? What’d we miss? Let us know in the comments!