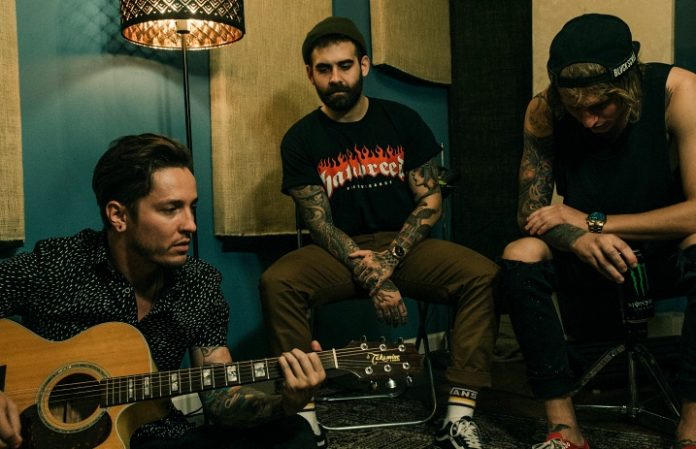 Arizona metalcore mavens The Word Alive have just offered us a brief (but eminently enticing) tease of one of the in-progress new songs from their upcoming fifth album! Check it out right here, but be forewarned: It's full of riffs!

And that's not all—vocalist Telle Smith's leg is almost healed after an onstage accident last month! Read more below.

“Clip of a new song in the demo stage,” the band write of the all-too-short video for the new tune they posted to Facebook on Tuesday, before adding that it “sounds even better now. Mixing of our new album is going amazing. Who is excited for the first single to drop in 2018?” We know we are!

The World Alive's forthcoming album release has already been tabbed as one of Our Most Anticipated heavy releases of 2018—and from the sound of it, this thing is going to be H-E-A-V-Y. Just take a look at what Smith tells us about the progressive nature of the anticipated new LP.

“The songs are way more dynamic than we've ever had before,” Smith says. “[It] has something for everyone—from the oldest the Word Alive fans to the newest… It doesn't really sound like anything else. I think this is the first record that we have kind of carved out our own little niche.”

Like we said, that's not all the good news from the Word Alive camp! Smith suffered a compound fracture last month, initially believing he'd need extensive surgery. But, as he posted today, Smith says it looks to be on the mend.

“MRI results came back and I won't need surgery!” he says. “I can begin walking normally, and in six more weeks, I will resume running and getting back to being as healthy inside and out as possible!” Check out his post here:

Needed good news and I got it!

MRI results came back and I won’t need surgery! I can begin walking normally and in 6 more weeks I will resume running and getting back to being as healthy inside and out as possible!

Thank you to everyone who has sent well wishes and prayers ���� pic.twitter.com/5TiG012fUd

Watch more: 10 things you didn't know about the Word Alive