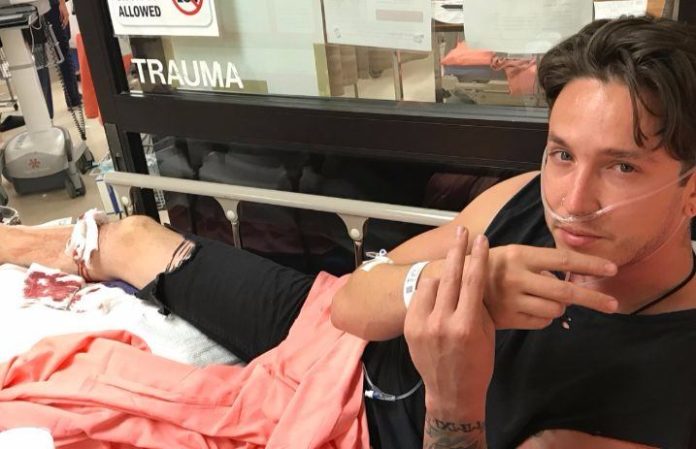 Talk about a disappointing development: Not only did the Word Alive vocalist Telle Smith suffer a compound fracture in his right leg during an onstage accident last month, the musician just found out he also broke his knee.

“So I finally got my post-tour checkup on my broken leg,” Smith tweeted on Tuesday. “Turns out I also broke my knee, so now when I get casted Thursday morning, it's three-quarters of my entire leg… Brutal.” See the singer's recent tweet and some pics of his post-injury performances below.

The injury stems from a fall Smith took at the band's Nov. 12 show at Los Angeles venue the Novo. As evidenced by the vocalist's Instagram photos, he apparently finished out the rest of the band's tour by performing while seated, with his leg taped up or partially casted. Here's what Smith had to say when we reached out to him immediately following the accident:

“I know the last couple of years, the music community has come together so much to help me and my family, and I appreciate anyone who has sent well wishes and reached out. At this point, I do not have a total cost of my hospital bill, so if you like something from one of the links below and want to help, all of the proceeds from my clothing line, Never Take It Off jewelry line, and book cameo requests will go towards my hospital bills and physical therapy. Thank you all, see you back and better than ever in 2018!”

Want to help Smith on his road to recovery? Check out his clothing line Resist & Rebel here or his jewelry collection Never Take It Off right here.

AP wishes Smith the best of luck in his recovery! The Word Alive's upcoming fifth album, due out this spring from Fearless Records, is already one of Our Most Anticipated heavy releases for 2018. Check it out!

So I finally got my post-tour checkup on my broken leg… Turns out I also broke my knee so now when I get casted Thursday morning it’s 3/4 of my entire leg… Brutal.

So this will be my stage outfit starting in 2018 I think ����‍♂️��#couldbeworse pic.twitter.com/fyz8W3zGsi

Are you a campfire? Cause you are hot and I want s'more

Last night in Los Angeles I suffered a compound fracture during our last song. Casted up for 6 weeks with physical therapy on the horizon, but I don’t plan on missing any shows. I’m going to try to perform while sitting down, so if you’re coming out to the remaining dates please go twice as hard for me. Unfortunately I don’t have health insurance as well, so if you want to help just grab something from my clothing line (resistandrebel.com) my jewelry line (nevertakeitoff.com) or click the link in my bio! Thank you to all my family and friends who have reached out or who were there for me last night. I’m thankful it wasn’t worse! I’ll be back and stronger than ever in 2018 ����