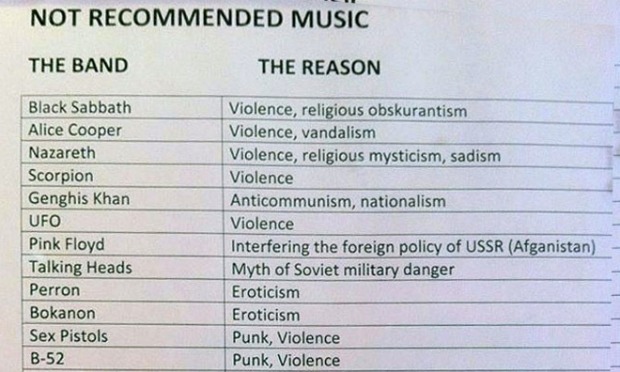 The Cold War-era Soviet Union was a pretty restrictive place, with laws enabling the government to control what music was being broadcasted on the radio stations.

As Consequence Of Sound points out, Uproxx has unearthed a list with a title that translates to “The Approximate List of Foreign Musical Groups And Artists Whose Repertoires Contain Ideologically Harmful Compositions.” In the list, Communist officials present a number of musicians whose obscenities merited a ban from radio, along with the specific reasons why those musicians were banned.

Naturally, plenty of punk bands make the cut—including Sex Pistols and Ramones—with “punk, violence” being one of the most cited reasons for banning. Pink Floyd’s music was banned for its potential of interfering with “the foreign policy of USSR (Afghanistan),” while Talking Heads’ music was banned for its part in the “myth of Soviet military danger.” Over all, just being “punk” seemed like enough of a reason to be banned.