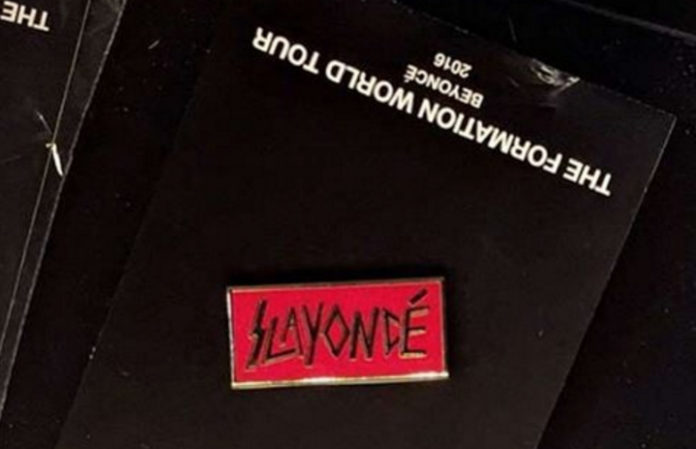 This is a pairing we never would have imagined. As Beyoncé’s Formation tour comes to a close, her Slayer-inspired “Slayoncé” pin is taking metal headlines by storm. (via Metal Insider)

A few months back, Ayesha King, who’s married to Slayer guitarist Kerry King, took to Instagram saying, “Just. Stop. Stop it right now. This is a real pin being sold at her merch tables on her tour.

As Metal Insider reports, the pins are currently selling on eBay for around $40 a piece.

It’s not the first time metal and mainstream have crossed paths. Most recently, Rihanna brought a death metal logo to the VMAs, with metal fans taking to social media sharing their reactions. Zayn Malik, formerly of One Direction, worked with a heavy metal illustrator on his merch.

What are your thoughts on “Slayoncé”? Let us know in the comments.

Just. Stop. Stop it right now. This is a real pin being sold at her merch tables on her tour. #whenittakes12writerstowriteasongforyouofcourseyoustealfontsandlogos #yesitsreal