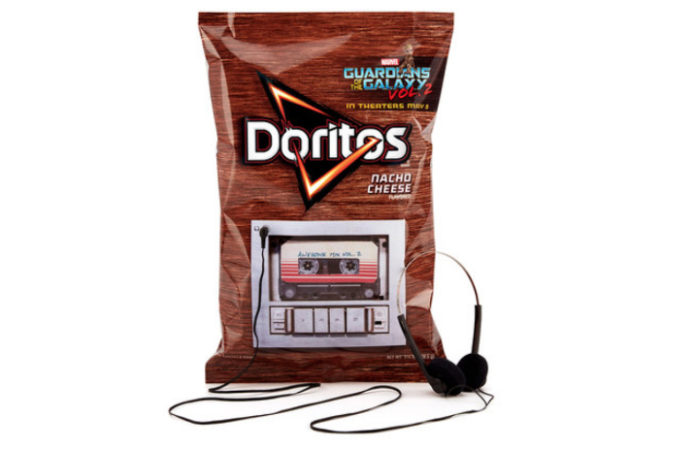 Yep, you read that right: Doritos and Marvel Studios are teaming up for a new way to listen to the Guardians of the Galaxy Vol. 2 soundtrack—with a custom-designed, limited edition series of Doritos bags featuring a built-in cassette tape-inspired player that plays the soundtrack in full, Billboard reports.

Plus, the bags can be recharged for repeat listening—how cool is that?

According to Billboard, the custom bags will be available for purchase on Amazon on April 28, but only while supplies last. And on May 5—the film’s release date—Doritos will host Rock Out Loud pop-up booths in New York and Los Angeles, where fans can sing the soundtrack’s tunes. Check out the Doritos site for more information.

“The Guardians of the Galaxy Vol. 2 was yet another way for us to take an amazing musical pop culture hit and elevate the experience,” Ryan Matiyow, senior director of marketing for PepsiCo’s Frito-Lay North America, told Billboard. “Can you imagine a better way to listen to this soundtrack than with a bag of Doritos? We couldn’t either.”

Guardians hits theaters May 5 and will have all of your favorite characters—and some new ones, like Mantis. Plus, Rob Zombie and Miley Cyrus are set to make vocal appearances in the film—so you won’t want to miss this. Check out a trailer below:

Do you want to get your hands on one of these new, music-playing Doritos bags? Let us know in the comments below!