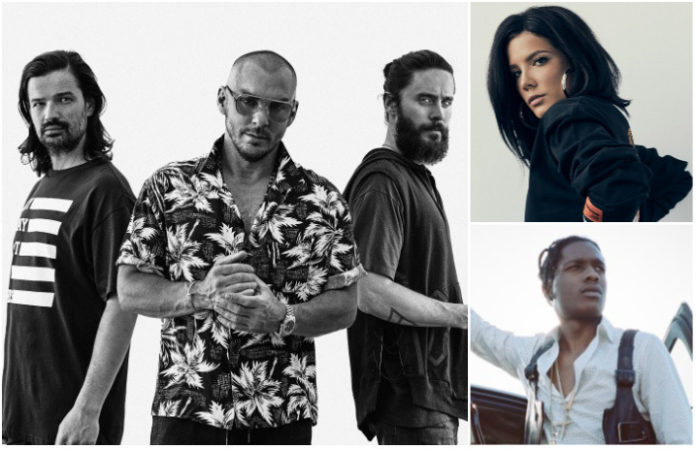 Thirty Seconds To Mars have revealed some exciting new details about their upcoming album, America. As the band’s anticipated fifth full-length effort, out April 6, it will feature guest spots from Halsey and A$AP Rocky, and a massive billboard campaign for the release is now being launched across the world. Plus, you can create your own artwork for the album! Get all the details below.

The band revealed America opener “Walk On Water” with a mesmerizing MTV Video Music Awards peformance last year, followed in January by second single “Dangerous Night,” and now there’s a full tracklist for the LP—check it out below (as well as a “Dangerous Night” remix). It looks like an album cut called “Love Is Madness” will enlist Halsey, while fresh single “One Track Mind” employs the skills of A$AP Rocky. Listen to “One Track Mind” on Spotify here.

In addition, America’s album concept extends to its artistically malleable artwork: The cover art features a list of some “six American names,” and, apparently, there will be a wealth of variants on this theme among the digital and physical versions of the release, according to the NME. You'll also be able to catch the America aesthetic on billboards across Los Angeles, New York and London. On top of that, you can even create your own list of “six things” in line with the album art style over at america.thirtysecondstomars.com.

Here’s what the band are saying about America's list idea: “For me, the lists are almost like a time capsule,” says frontman Jared Leto. “Independently, they may surprise, entertain or provoke, but as a group they give us a sense of the culture we are a part of and the times we are living in.”

Get your America on:

We want to see your #AMERICA. Customize your cover: https://t.co/0SjYai88Z6 pic.twitter.com/sj73II5eer