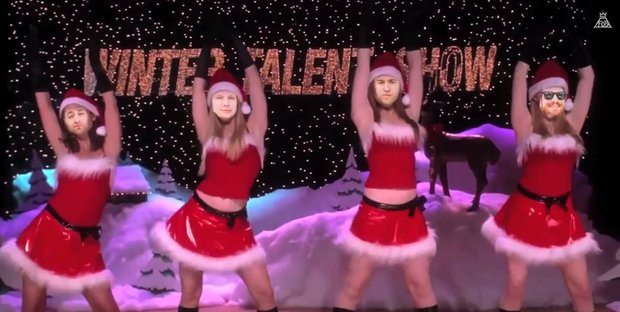 Happy Mean Girls Day… or should we say, October 3. Fall Out Boy spread some holiday cheer a few years back with this hilarious video, and it just seems fitting to bring it back on the day that Cady asks Aaron what day it is.

Check it out below and let the laughter ensue.

Read more: Someone mashed up “Sugar We’re Goin Down” and “Higher” by Creed and it’s actually amazing

The video features the ever-memorable talent show scene in Mean Girls, where the band pasted cutouts of their faces on top of the original actors'.

We aren't fully sure why they decided to do this, but we can't argue that it's seriously hilarious. Give it a watch below:

“We are pushing the record release date back to January 19th,” Patrick Stump explained on Twitter. “I didn't mention that. Yeah… pretty big bummer. We had some long talks and a lot to weigh about it all and collectively thought that was best.”

Don't forget to pick up your Mean Girls-inspired “Every day we listen to emo music” tee. It's only fitting, right?

This story was originally published December 22, 2014 and updated October 2017.