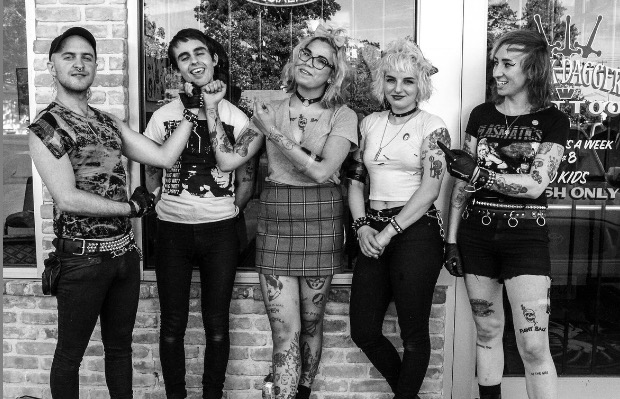 G.L.O.S.S. has made headlines after turning down Epitaph’s $50,000 deal for the group’s debut album, and Thursday singer Geoff Rickly has joined in the conversation via Twitter, supporting the group’s decision.

“I BELIEVE THEY ARE SINCERE,” he writes. “They are attempting to put their money where their mouths are. They’re doing it for themselves, to walk outside the constrictions of society. But they’re also doing it FOR THE KIDS…Showing the people that look up to them—This is possible.” Read the statement in full below.

According to G.L.O.S.S. singer Sadie Switchblade's Instagram post, the group turned down the offer with Epitaph in a hope to maintain their place in the do-it-yourself scene. “What I'm trying to say is that we don't have to jump into their world, we can create a new one,” Switchblade wrote.

This is a quick note about the private Instagram post going around, detailing Epitaph’s offer to sign G.L.O.S.S. As a “private” post, I think we should all take it with a grain of salt. I also get the impression from a lot of my friends in bands that millions of eyes have been violently rolling at Sadie’s post. And yes, I get it. It comes off as a little pretentious, possibly borderline self-righteous and, CERTAINLY, it’s in the running for punk humble brag of the year. I fi had to rate it, personally, I’d give it an eye-roll with a laugh of delight tacked on at the end. I’ve given similar ratings to things in the past: when French band, Daitro, leaked an email where my band, Thursday, earnestly asked them to go on tour and they went through a litany of reasons why they hated us. I had to smile and laugh in appreciation of their pitch-perfect performance of the European skramz version of punk attitude. Germans have a wonderful word: schadenfreude. Pleasure derived from another person’s misfortune. I have to admit, I feel it. Hell, the internet is pretty much 24-7 confirmation that WE ALL FEEL IT. The joy of seeing someone get dragged brutally in a public forum. With the Daitro thing, it was sort of thrilling to see someone attack my band so viciously for literally no reason, except to try and prove how superior they were to us. Sure, it burned. But wow, they didn’t hold back. I was impressed. And I felt that it was obvious how full of shit they were for leaking it to a big punk rock media outlet.

So watching G.L.O.S.S. do the same thing to Epitaph has been similarly thrilling. I’ve put out records with the label. They’ve treated Thursday great. I love the people and I love that the label treats everyone nicely. But I still enjoyed watching them get thrashed for being a part of corporate rock. Not because I think Eptiaph is the least bit damaging to the industry. Just because I have dark places in my soul, like everyone else 😉

Then people started to share the post and trash Sadie//G.L.O.S.S. for writing it. I get this TOO. They’re bragging about not signing to a big label. So they get the recognition and press coverage of both being big enough to get signed to the big label AND they get to keep the integrity of saying FUCK YOU to the CORPORATE MUSIC OVERLORDS. I also get why the band couldn’t keep it to themselves. In their small circle, you know that the rumors have been swirling: “I heard G.L.O.S.S. is totally selling us all out”—“No way, Epitaph would NEVER offer them a deal, THEY SUCK”…So Sadie thought they HAD TO address it. They’re young. No full length yet. This kind of stuff seems desperately urgent when you don’t have a ton of experience at it. Mostly it’s just immature. It doesn’t mean they’re full of shit. Or phonies.

Yes, this note is meant to defend G.L.O.S.S… Not because they were 100% in the right for this. But because I see some disturbing things in the controversy: I’ve seen people use this as a reason to discredit G.L.O.S.S. and say that they both suck as a band and that their motives and methods are hypocritical. That they are BAD PEOPLE, a BAD BAND and are BAD FOR DIY. One of the gripes about the letter was that they noted that they could probably make more money putting it out themselves: SO THEY ARE REALLY JUST SHREWD CAPITALISTS aka NOT PUNK. Another gripe I saw was that they are problematic because they promote violence against CIS-Gendered men and others… I understand this point but, in my view, we are starting to get into some hot water of the “not all men” variety. I think that we have to look at art as ART. Rage Against The Machine “promotes violence towards an oppressive system”—yet we see that as a radical voice for all of us that have been oppressed by control systems. And G.L.O.S.S. are in a vulnerable segment of the population. It’s pretty clear that Trans people are one of the last groups to see ANY KIND of protection. They’ve been openly reviled for so long that we need to see art is the perfect vehicle for empowerment. The band could just be out there stabbing straight guys if they were really interested in violence towards CIS men. But that’s not what they’re doing. No, they’re injecting some Malcom-style militance into a population that’s been violently degraded more than just about anyone else in America. G.L.O.S.S. states repeatedly that its time to take it all back BY ANY MEANS NECESSARY. Taking power back in a spiritually violent way is a very powerful idea. We do well to remember that violence directed at an oppressor is very different than violence perpetrated by an oppressor. On every level. But especially when we get to the figurative levels.

I just want to end this brief “defense” of G.L.O.S.S. and Sadie on a personal note. I tried to sign Sadie’s other band, the excellent Dyke Drama to Collect records. A much smaller label than Epitaph but we had resources. Indeed, we would have bought Sadie a van as well. We would’ve supported the band while they toured with Beach Slang or Against ME! or any one of the giant bands that adores Sadie. But we were distributed by the same company as Epitaph and Sadie brought up the same concerns. We discussed every possible version of a deal: funding their own DIY label with no interest loan and operating it with them (using our experience, as well as our money), possibly breaking our distribution contract and doing direct sales with every account to accommodate their ethics (not an easy proposition for a label with 3 to 5 employees at any given time)… We got philosophical, discussing how deeply DIY its even possible to be. This subject was raised when I saw Ian Mackaye speak recently: ‘How did you get here? Because all of us depend on infrastructure built with capitalism's blood money.’ Still, G.L.O.S.S. is working on their boundaries and, as much as I was sad to be drawn outside of their acceptable lines, I was proud of them for sticking to their beliefs—and they didn’t brag about burning the dude from Thursday… Some bands certainly did, especially when Collect was stuck with its own dubious headlines.

What I can say about those conversations, and what I feel I can say about G.L.O.S.S., in general: I BELIEVE THEY ARE SINCERE,” he writes. “They are attempting to put their money where their mouths are. They’re doing it for themselves, to walk outside the constrictions of society. But they’re also doing it FOR THE KIDS. A public show of power for everyone else in a vulnerable position. A FUCK THEM to the power structures from the margins. That, in itself, is significant. Showing the people that look up to them—This is possible.”

YES. IT’S DONE WITH PAGEANTRY. But so is much of the G.L.O.S.S. aesthetic//ethic. G.I.R.L.S. LIVING OUTSIDE SOCIETY’S SHIT. A trans day of revenge. This has all been explicit since day one. It’s ok to roll your eyes at this little snafu. But it’s not ok to try and discredit this band for any of this.

It’s also significant that Epitaph wants to sign G.L.O.S.S. It means that they are still looking to support vital artists that aren’t just easily fed into the grist mill. They’re not just riding the easy punk profit train.

This isn’t directed at anyone in particular. I’ve had wonderful, passionate debates with lots of friends today/yesterday on this subject.

Brief notes in defense of G.L.O.S.S. I'm interested in discussing, not telling anyone “how it is”! pic.twitter.com/UFIZsf8W67