Australian deathcore act Thy Art Is Murder have announced plans for their latest record Human Target.

The record is due out July 26 for Nuclear Blast and follows their 2017 album Dear Desolation. The new record will be the first to feature new drummer Jesse Beahler who replaced founding member Lee Stanton.

Read More: Halsey says next album is “better” than ‘Badlands’

To go along with the album announcement, the band have released a blood-soaked video for the title track filled.

Guitarist Andy Marsh says “Human Target” was the last song written and sets the pace for the entire record.

“Human organ harvesting had been brought to my attention as a serious matter that wasn’t receiving much coverage – or not enough for me to hear about it – and I thought the issue required more scrutiny and awareness. To distill the metaphors of proletariat subjugation down to the visceral injustice of taking away the engines of life, seemed to be a powerful atmosphere to open the record.”

Take a look at the album art and tracklist below. 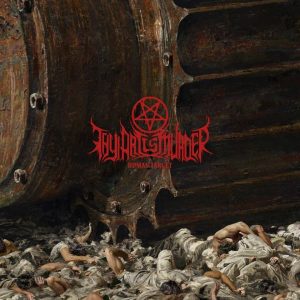 Thy Art Is Murder’s last album saw the return of vocalist CJ McMahon while their sound moved further from deathcore to death metal.

Their North American tour with Architects and While She Sleeps starts today in Anaheim, California and wraps up May 25 in Chicago, Illinois.

North American dates w/ Architects and While She Sleeps

Check out the video for “Human Target” below and let us know what you think in the comments.