Ticketmaster is continuing to speak out after accusations that they were working behind-the-scenes with online ticket scalpers in order to profit twice.

According to an investigative report by CBC News and the Toronto Star, Ticketmaster was allowing them to have more than one Ticketmaster account to secure tickets and resell on Ticketmaster’s secondary-market site TradeDesk.

Read more: Louder Than Life 2018 canceled due to “unsafe conditions”

As a result, Ticketmaster profits twice while also allowing users to directly violate their own terms and use policy by having more than one account. Ticketmaster president Jared Smith is now commenting on the accusations, stating the company is going to investigate its own policies regarding the secondary-market, according to Billboard.

“We absolutely do not turn a blind eye to the misuse of our products,” Smith says. ”As you know, we spend a ton of money and a ton of time doing things like building software that prevents bots from buying tickets. These tools are not perfect, but we continue to improve those tools that identify suspicious activity.”

“We have gotten pretty effective at blocking people from buying lots of tickets, and we take it seriously,” he continues. “Where the distinction has been made and where we have to improve, I think, is on the backside of those products. We probably don’t do enough to look into TradeDesk even though it’s hard and it’s not as obvious as people are suggesting it is.”

Smith referred to the investigative story that exposed the practices to be “frustrating,” but admitted the company plans to learn from it and make changes. He also claims that many people don’t understand what resale is and how important of a role it plays.

“They believe that all resale is bad and scalpers are buying tickets and selling them for massive profit,” he says. “The reality is, there’s a clear distinction in the resale market between ticket brokers, generally, most of which are legitimate and play a role in the ecosystem that lots of people rely upon.”

“That is separate and distinct from cheaters and people who use bots and make up fake accounts, doing all of these things to try and get as many tickets as they can, mostly for the high-demand shows,” he continues. “Those are the people that we’re absolutely waking up every day trying to find.”

Despite seeing a need for resale, Smith assures Ticketmaster does not provide a preference for scalpers.

“We do not provide preference in any way for any group of people, professional or otherwise, nor do we provide tools or programs that allow them to buy tickets in bulk or gain an advantage over fans,” he says. “Period. We do not do that. We never have. We never will.”

Smith says TradeDesk is meant as a “inventory management tool” for professional sellers. He also points to StubHub and VivdSeats as having a similar tools in Ticket Utils and SkyBox respectively. However, Ticketmaster claims that unlike their competitors, they actually verify the validity of the tickets being posted to TradeDesk.

While the tickets are valid, Smith admits that sellers may very well may be reselling more than their ticket limit but they they’re doing so legitimately.

“They could have bought them from other resellers or directly from the venue,” he says. ”You can’t just go back and say, ‘Hey, you have 50 tickets. The ticket limit was 10 and therefore you’re a criminal and we’re canceling all your tickets.’ It’s not that easy.”

Smith assures Ticketmaster plans to look into suspicious activity more closely and that the claim they’re trying to profit twice is inaccurate. While they do profit via TradeDesk, it’s a small portion of their income.

“Resale is a much, much smaller portion of where the company makes money,” he says. ”The resale market does exist and it needs to be serviced and if we weren’t in it then other people would be.”

What do you think of the accusations against Ticketmaster? Sound off in the comments! 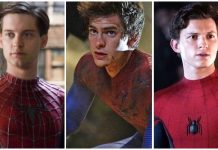 Did this ‘Spider-Man 3’ teaser accidentally confirm the Peter Parker rumor?