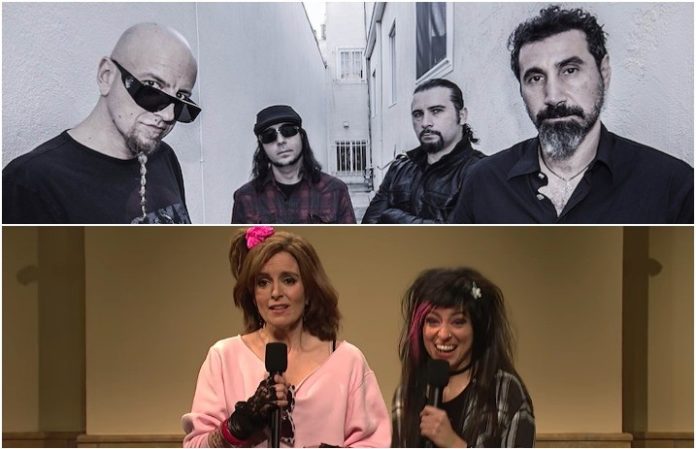 This past weekend, Tina Fey acted as both host and resident “cool mom” on Saturday Night Live while delivering an excellent performance of System Of A Down's top songs.

Check the performance from here SNL episode, below!

Read more: System Of A Down announce first U.S. tour dates in 3 years

During the episode, the iconic mother and daughter duo of Roberta and Susan (Fey and Melissa Villaseñor) performed a few classics during Susan's high school talent show.

The first time the pair walks onstage, Roberta wants to do a cover of Cyndi Lauper's “Girls Just Wanna Have Fun,” a song choice that isn't something her daughter Susan is completely down with, which inevitably forces the duo to change things up.

After going off stage to figure out what song they actually want to perform, the two come back to the stage to perform Susan's pick, System Of A Down's 2001 hit, “Chop Suey!” Of course, Fey's character isn't thrilled with the choice, but after learning that she gets to perform a part in the song, with her daughter, she's more than willing to throw around some pretty epic “you wanted to.”

System Of A Down recently announced three shows in October with support from At The Drive In and Skeleton Witch.

Check out the cities and dates below, and pick up your tickets here.

The band haven’t released an album since 2005’s Mezmerize/Hypnotize.