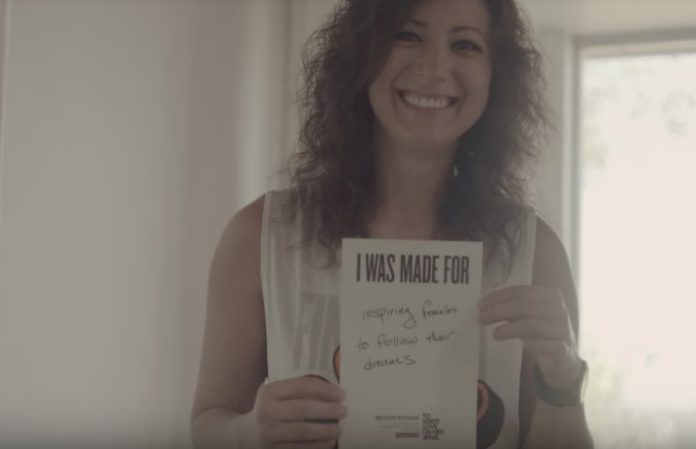 [Photo by: To Write Love on Her Arms/ Youtube]

To Write Love On Her Arms have teamed up with some of our favorite people including The Summer Set's Jess Bowen and The Ready Set to release an inspiring and heartwarming video for World Suicide Prevention Day.

World Suicide Prevention Day's official theme this year is #IWasMadeFor, inspired by Jessica Morris' book When Hope Speaks. In the book, Morris writes “Stay and discover these new lands. These new people. The hidden gems you didn’t even know existed. Stay and find out what you were made for. You are not a failure. You are not irreparably broken. Step forward now, crawl if you must, into a grace that shines light into the shadows of your soul. You are safe here. In fact, this is home.”

With this theme in mind, TWLOHA have teamed up several musicians and athletes including Cleveland Cavalier Kyle Korver and Olympic Gold Medalist Alex Morgan telling us what they were made for. Some of our favorites include Bowen's reason of “inspiring females to follow their dreams” and Debby Ryan's reason of “being a daughter and a sister.”

You can watch the complete video below.

TWLOHA founder Jamie Tworkowski commented, “We've learned that 800,000 people die by suicide worldwide every single year. That's one person every 40 seconds. Our goal with this video and this campaign is to see those numbers change, to see people get help and stay alive.”

During this campaign, TWLOHA are also raising money for World Suicide Prevention Day and National Suicide Prevention Week through donations and through special packs, which range from $30 to $42 dollars. These packs include t-shirts, tank tops, bracelets, posters, and pins to “not only raise awareness for suicide prevention, but to also start conversations within your community – both in person and online.”

You can purchase one of these special packs here.

Every dollar raised through this campaign will be invested into treatment and recovery, which is why we're so happy seeing how much this video has already spread through Twitter.

Sunday is World Suicide Prevention Day. I'm honored to stand with @TWLOHA in asking you to STAY #IWasMadeFor #WSPD17 https://t.co/vhyxgbFpn8

What did you think of the video? Let us know in the comments!