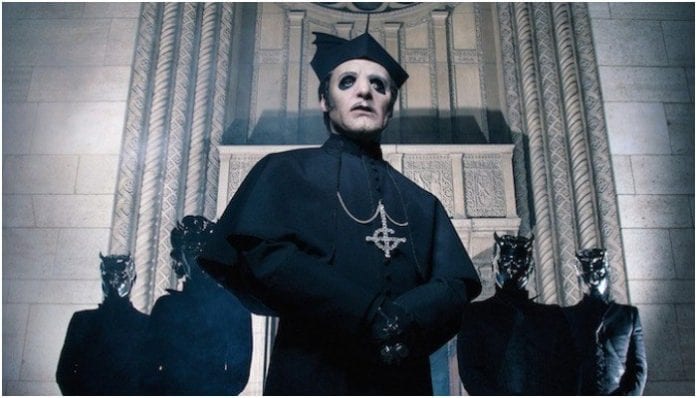 Tobias Forge has offered another update on the status of Ghost‘s next album and some fans won’t be too stoked on the news.

Forge confirmed this week that their next album won’t be arriving “this winter” after all.

The arrival of Ghost’s follow up to 2018’s Prequelle has been highly-anticipated for well over a year. In fact, back in March 2019, Forge himself spilled a few secrets about their next album that caused the anticipation to grow.

At first, he teased that Ghost could be doing something they’ve never done before by bringing Cardinal Copia back for another album.

“I have a vague idea of what’s in store,” he said. “It’s gonna change over the years, to whatever extent we’ll be around. Right now, if everything goes according to plan, we’re hoping for Cardi to be strong enough and cool enough to possibly do something that none of the previous ones have done, and that’s basically to do two cycles.”

Despite the plans, however, Forge told fans to not expect the new album anytime soon. The reason? Well, Ghost had a lot of touring to do in 2019. As well, Forge also said he didn’t want to release an album until after the U.S. presidential election.

Then, Ghost entered the studio at the beginning of 2020 to begin recording their next album. It wasn’t until March, however, that fans realized Ghost’s plans had changed.

The Swedish band played their only show of 2020 in Mexico City. The performance also marked the end of the Prequelle album cycle. However, it was confirmed that Forge’s persona Cardinal Copia isn’t returning for the next album. During the performance, Cardinal Copia was anointed as Papa Emeritus IV, marking a new era in Ghost’s career.

Following the show, Ghost’s plans continued to change due to the coronavirus pandemic. Along with many other artists, Ghost postponed their tour dates from March 2021 to next autumn.

Then, earlier this month, Forge finally confirmed that Ghost’s next album is arriving “this winter.” However, it looks like plans have changed once again over the past few weeks. Forge spoke with Sweden Rock Magazine on Oct. 16 where he offered another update on the status of Ghost’s new album.

Forge shares that pre-production for the album has started. He plans to work on writing for the album until Christmas. Then, Ghost will head into the studio in January 2021. Given the schedule and time needed to complete the record, it looks like fans won’t get to hear any new material until late 2021.

“The plan now is for me to be here [in the studio] writing for another two months until Christmas,” Forge says.”The idea is for the album to be recorded in January. The actual recording will last around six weeks and then there are two to three weeks of mixing and mastering. So sometime in March the record should be finished, but it won’t be released until after the summer.”

Forge also shares that Ghost hope to hit the road sometime next year in support of the new album.

“As it looks now, knock on wood, we will then go on tour,” he continues. “We won’t release an album until we know that we are actually going on tour. The album release will coincide with the start of a tour. Of course, we could announce an album release date and then, for some reason, it might not be possible to tour, but that’s a whole other matter.”

Read more: Billie Joe Armstrong would only give this classic Green Day album a sequel

Given the current state of the world, many Ghost fans assume that the next record will be all about the coronavirus pandemic. However, Forge previously shared that listeners shouldn’t expect any pandemic songs. Why? Well, Ghost already have an album about doomsday.

“I have already made a record about God’s wrath and doomsday, even if Prequelle was not about just infection from a medical perspective,” Forge says. “But I have a feeling that there will be plenty of doomsday and quarantine-confirming records in the future, and I think I might not participate in it.”

Are you ready to hear Ghost’s new album? Let us know in the comments below.