Tom DeLonge posted a photo playing up Box Car Racer and after a fan mentioned guests who should be invited for potential new music, Anthony Green says “I’m in.”

The Circa Survive vocalist and solo musician has been staying busy with his own music but it’s undeniable that this would be a sweet collaboration.

DeLonge posted the photo with a simple devil horns hand emoji and no further context.

Fans poured in with comments talking about how much their self-titled 2002 record meant to them and how they want more material to come out.

One fan though went a step further making suggestions for who should appear on the record.

Green actually responded to the fan though with a blunt message saying he’s all for the idea. 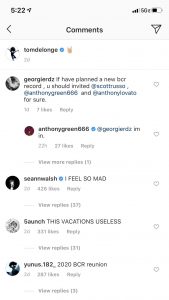 Back in 2017, DeLonge teased on Twitter asking fans who should guest on a new Box Car Racer album “if there was one.” Green jokingly responded that time too agreeing with a fan who jumped straight to him as a guest.

yeah Anthony green would be perfect

It’s been nearly two decades since Box Car Racer put out any music. Back in October, DeLonge said new Angels & Airwaves would have a similar sound to the band though.

He gave a teaser for new music back then with the post captioned saying “Recording @angelsandairwaves today… #KindOfSoundsLikeBoxCarRacer.”

Clearly Tom wants to do something with Box Car Racer.

Would you like to hear Anthony Green work on new Box Car Racer material? Let us know your thoughts in the comments below.