While we anxiously await the new “Kiss And Tell” video from Angels & Airwaves, we’re left with another teaser from frontman Tom DeLonge.

It looks like new AVA is on the way and according to DeLonge, could have a familiar sound that fans may recognize.

Earlier today, DeLonge took to Instagram to share a short teaser video of some new Angels & Airwaves music. Along with the music teaser, the frontman added a hashtag to the post’s caption that left fans even more excited. 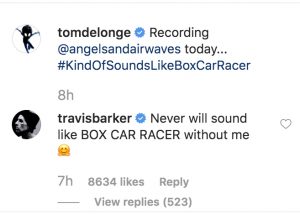 Box Car Racer you say? Check out the post below to see for yourself!

This news comes after a few teasers for the forthcoming “Kiss And Tell” video. While there’s no official release date for the music video, we’re keeping our fingers crossed that we’ll get our eyes on it soon!

The band debuted the track back in August, release it one day early to the surprise of their fans.

“The beginning of the song is really an ode to The Beach Boys,” Tom DeLonge explains. “It opens with three-part harmonies to create an introduction with multi-dimensionality. We wanted to create a sound that had electronic elements right alongside classic rock and pop-punk melodic structures.  Lyrically, this song is specifically about balancing on the edge of a razor blade. Doing something you’re not supposed to be doing, and although you might die while doing it, it’s still very much keeping you feeling alive.”

You can check out the track below.