1. The Maine reveal how they got their band name

It would be way cooler if we had a grand story about how we got our band name but it was really simple. We needed a name before a show we had booked in a week and we loved a song called “Coast of Maine” by a band called Ivory so we went with “The Maine” John covered the song a few years ago. Some of you might not of heard it. Hope you enjoy!!!!

Earlier today, the Maine discussed on social media how they arrived at their band name. Ivory’s song “Coast Of Maine” inspired the band. They all agreed on their name the Maine in its honor, and John O’Callaghan even covered Ivory’s song on Instagram.

Dance Gavin Dance have been on the Erase Me tour with Underoath, Crown The Empire and the Plot In You. The group announced on social media they would be adding two new shows. They will be playing in Milwaukee, Wisconsin Nov. 30 and in Pittsburgh, Pennsylvania Dec. 4. Tickets will go on sale Friday and can be found here. 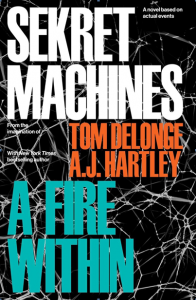 Former blink-182 frontman Tom DeLonge joined mystery novelist A.J. Hartley to write a new book entitled Sekret Machines: A Fire Within. The adventure series combines elements of history, conspiracy and technology. The first three chapters can be read here. The book can also be purchased at Barnes & Noble and Amazon.

Rising British alt-rock force YUNGBLUD recently hit the road for part of the final cross-country Vans Warped Tour. While in the U.S., the singer tried a variety of American foods froma Chicago-style hot dog to being highly entertained while eating wings in a strip club. YUNGBLUD’s latest 21st Century Liability, is out now, and he will be hitting the road this month in the U.S. and early next year in Europe. Dates can be viewed here.