It looks like Weasley and Malfoy are at it again.

After earning over 1.5 million Instagram followers in a matter of hours, Tom Felton gave a warm welcome to his co-star in the most Draco Malfoy way ever.

Like many of his Harry Potter co-stars, Grint has managed to keep a rather private life over the years. Back in May, it was announced that he and Georgia Groome welcomed their first child together.

“Rupert Grint and Georgia Groome are delighted to confirm the birth of their baby girl,” their publicist said. “We would please ask that you respect their privacy at this very special time.”

So, naturally, Grint decided to announce his arrival on Instagram in the most adorable way ever. On Tuesday, he shared the first photo of his daughter and also revealed she is named Wednesday G. Grint.

“Hey Instagram….only 10 years late, but here I am. Grint on the Gram! Here to introduce you all to Wednesday G. Grint. Stay safe, Rupert”

Hey Instagram….only 10 years late, but here I am. Grint on the Gram! Here to introduce you all to Wednesday G. Grint. Stay safe, Rupert

The post quickly received a lot of comments congratulating both Grint and Groome and welcoming him to Instagram. His Harry Potter co-star Tom Felton even took a break from his TikTok takeover to give Grint a shout out. Of course, Felton welcomed him in the most Draco Malfoy way ever. 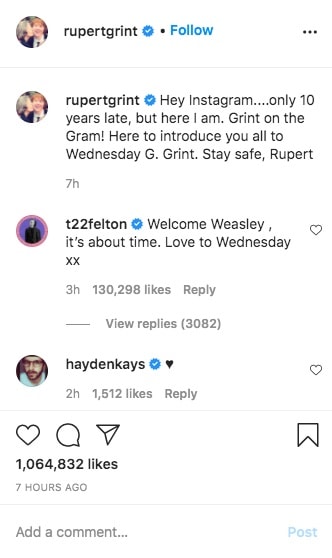 Grint also gave a nod to his Harry Potter days in his Instagram profile photo which is with his co-star Maggie Smith.

Felton and Grint’s latest interaction comes just weeks after Felton revealed he has reunion plans in the works. Back in October, Felton shared that he is working on a rare cast reunion for an upcoming Harry Potter anniversary.

The Harry Potter And The Sorcerer’s Stone film was released on Nov. 14, 2001. With the 19th anniversary of the movie right around the corner, Felton thinks now is the perfect time to get the cast together again.

“It’s been nice because it’s the 19th-year anniversary on Nov. 14, so I’m planning some sort of digital celebration,” he told Entertainment Tonight. “I’m trying to wrangle all the oldies back together again to celebrate the achievement really.”

Even though his reunion plans are still unknown, Felton did recently get together with another Harry Potter co-star. Last month, he reunited with his on-screen father Jason Isaacs (Lucius Malfoy) for his #Pottachallenge on TikTok.

What are your reactions to Tom Felton’s comment on Rupert Grint’s Instagram? Do you think a Harry Potter reunion will actually happen? Let us know your thoughts in the comments below.