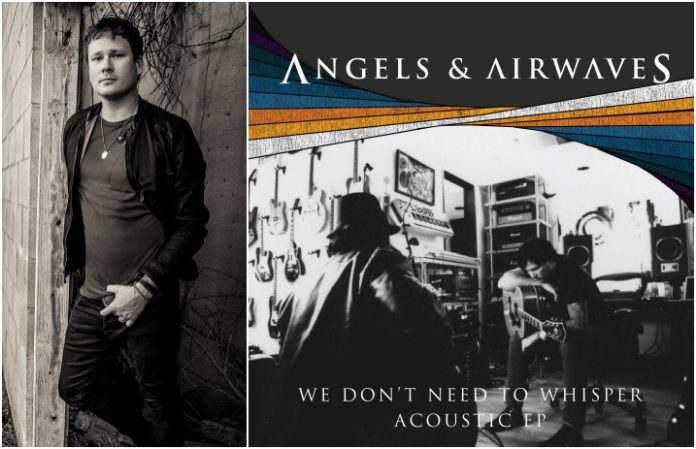 The new Angels & Airwaves EP is now available for download exclusively from DeLonge's To The Stars site here. The release will be available on music streaming services beginning this Friday, August 25, and pre-orders for the acoustic EP are on iTunes here.

AVA—who last released the Chasing Shadows EP in 2016—are currently in the studio working on a soundtrack to DeLonge's upcoming Strange Times film, the anticipated cinematic extension of the musician and author's science fiction novel series of the same name. In the meantime, DeLonge says he wanted to have some fun by issuing new, stripped-down versions of WDNTW tunes.

“It's been about a year since we put out new music,” says DeLonge, “and I wanted to give the fans something while the band works on the soundtrack to the upcoming Strange Times film. Being in the studio brought back memories of AVA's first album and I thought it'd be fun to reimagine those tracks and play around with the arrangements a bit. It's the first time we've ever put out an all-acoustic release and it's great to be able to do it with these songs, which are all pretty special to me.”

As previously reported by AP, DeLonge teased that a batch of fresh AVA material was on the way earlier this year. The Box Car Racer founder and ertswhile Blink-182 member clearly wasn't messing around, and the four rejuvenated selections on We Don't Need To Whisper – Acoustic EP showcase DeLonge's imaginative arrangements along with a more mature, soulful vocal style.

On a more somber note, DeLonge is dedicating the new AVA EP to producer Jeff “Critter” Newell, who passed away in 2012.

“Critter was everything to us,” DeLonge says. “We considered him a member of the band. He had the most artistic and beautiful soul and was such a big part of our lives. He always spoke with such poetry. He was my companion during the making of the first years of AVA. He would drink and dance in the studio parking lot to these songs till 4 a.m. When we started recording these new versions, I couldn't stop thinking about how much I miss him. His spirit was definitely with us in the studio.”

In addition to the four new songs on the EP, take a look at a new lyric video for “The Adventure,” below, which features rare footage from the band's original We Don't Need To Whisper studio sessions in 2005 and 2006.

The Adventure (Lyric Video) by Angels & Airwaves on VEVO.