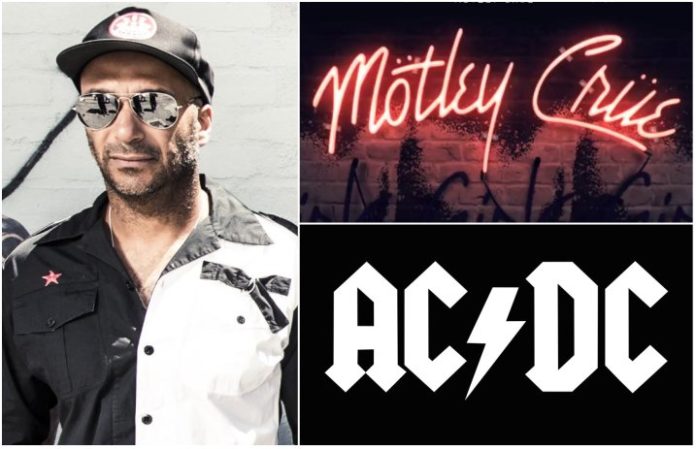 Rage Against The Machine and Prophets Of Rage guitarist Tom Morello is unpacking the questionable content offered by some of his favorite classic rock bands, saying that he still loves acts such as Mötley Crüe and AC/DC despite their pervasive misogynistic, and often nefarious, lyrical themes.

As reported by NME, Morello is facing head-on the growing dilemma of separating the art from the artist, arguing that it is indeed possible to enjoy a band's music while ignoring their attitudes or political stances.

“I was a huge fan of bands like Mötley Crüe and AC/DC,” Morello tells HardDrive Radio, “and the lyrical content was super misogynist on the one hand, and sort of quasi-devil-worshiping on the other, and I was neither down with women-hating or the devil, and yet I loved those bands; they were super rocking.”

Morello takes it a step further, countering his seemingly liberal views by offering his respect for artists like Kid Rock and Ted Nugent. The guitarist says he likes both performers, notwithstanding their opposite perspectives.

“I'm a fan of Ted Nugent's music and Kid Rock's music, and I like both of them as people; I consider them both friends,” Morello says. “They're people I may not agree with, if we had a checklist of stuff, but they're both good, decent people, and I'm proud to be friends with both of them.”

Morello says fans can apply the same method to enjoying the music of his own bands, RATM and Prophets Of Rage. The musician makes clear that there's always a “place for you in the pit,” regardless of your beliefs.

“There's certainly no litmus test—and neither was there with Rage Against The Machine and certainly there isn't with Prophets Of Rage—you don’t have to be down with the message to enjoy… there’s a place for you in the pit.”

Do you agree with Morello's take on artists who peddle dubious messages or live seemingly less-than-reputable personal lives? Can you separate the art from the artist when enjoying music? Sound off in the comments.