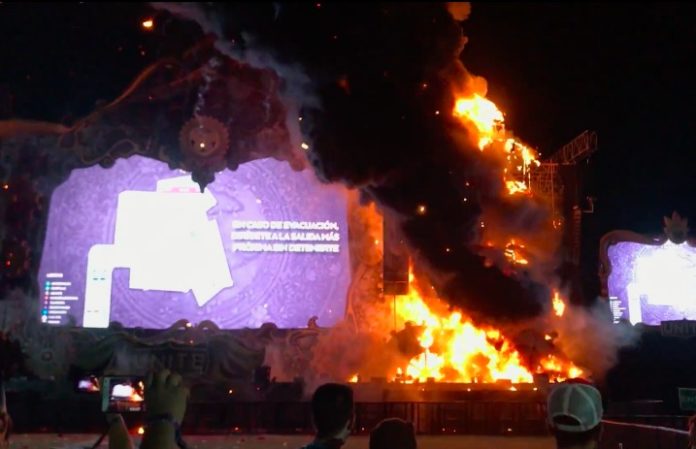 The popular EDM festival Tomorrowland, usually held in Belgium, took the show on the road to eight different countries this year.

At Tomorrowland UNITE in Barcelona, Spain on Saturday night, the stage caught fire and caused an evacuation.

All 22,000 attendees were evacuated safely as the flames engulfed the stage. Tomorrowland UNITE organizers say there have been no reported injuries.

Tomorrowland has released a statement on Facebook saying that the fire was the result of a “technical malfunction.” Read their full statement below:

Tonight, July 29th 2017, the UNITE Barcelona stage caught fire due to a technical malfunction. Thanks to the professional intervention of the authorities all 22.000 visitors were evacuated safely and without reports of injuries. Authorities will follow up and continue the investigation with the local Spanish organizer of UNITE.

Fans captured videos of the chaos at the main stage in Barcelona. Check out the footage below.

Your set was on fire, maybe too much for Barcelona. pic.twitter.com/CnQZE5pKTn

Tomorrowland has canceled the Taiwan event that was sceduled to ensure everyone's safety.

We are glad everyone got out safely, with no injuries reported.