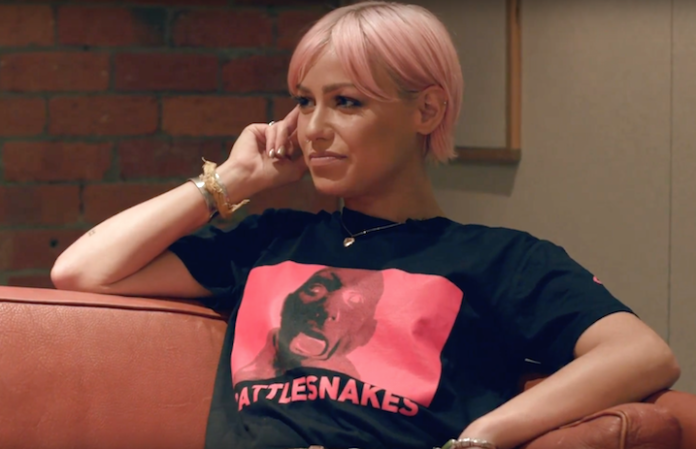 As Australian alt-rock outfit Tonight Alive gear up to release their fourth album, Underworld, vocalist Jenna McDougall has found herself in a brutally honest headspace. In an interview in the most recent issue of Alternative Press she opens up about her health issues and the eating disorder in hopes that sharing her struggles will help others.

“I definitely have played it safe for a lot of my life and career,” reveals Tonight Alive vocalist Jenna McDougall about the creative, emotional and physical arcs that coiled around her during the making of her band’s new album. “Having been in Tonight Alive since I was 16, and also having the older brother figures in the band, I’ve always been really protected. That kept me from fully experiencing pain or putting myself out there and taking that risk of people seeing me for all that I am. I can’t wish that it was any different, but it’s really liberating now to be encouraged to be honest.”

For their fourth album, McDougall was able to handle the psychic and physical ties that bound her to a state of near-collapse. On tracks like the extremely autobiographical “Temple,” and the majestic perfection of “Disappear” (TA’s collaboration with PVRIS’ Lynn Gunn), McDougall became completely fearless, shouting her frustrations and belting out anthemic pop melodies with a fury she never mustered previously. If listeners find that Underworld portrays a more urgent, attitudinal McDougall than what she’s conveyed on previous records, there’s a big reason for that. For years, McDougall had been coping with a number of serious physical concerns that put her health at considerable risk. Food allergies and sensitivities and chronic eczema gave way to bulimia. Which then led to further control issues with a body constantly in a state of mutiny.

“The inception of it is from my food allergies and sensitivities, and having those reactions all the time. And, you know, having the chronic eczema and that fatigue that I was talking about—and then, on top of that, having my very strict diet as it was, and then having allergic reactions to everything I ate. I just felt like, ‘There’s nothing I can do here.’ And so I just kind of got into that habit of throwing up, because it was out of fear,” she reveals.

“I was terrified that my condition would get worse. And I knew it would, because I could bite someone else’s pizza, or I could take a couple of mouthfuls of wine or something like that, and have an allergic reaction. I was like, ‘Well, I know that if I throw this up, then I can have it, and I can enjoy it, but not have to pay the consequence.’ Because there was always a consequence to everything I did, felt, ate. It resulted in the worsening of my condition. I felt like nothing was making it better. Not yoga, not acupuncture, not herbs. Nothing.”

The triple-threat of McDougall’s honesty, her renewed confidence and TA’s bevy of passionate songs will be welcomed by both longtime fans and new listeners. It was a hard time getting to this point, but Tonight Alive have arrived to renew your faith in the healing power of music.

“Since making Underworld, and putting the release together, I’ve been really encouraged to speak my truth,” she says. “And that’s such a nice way to be supported by the people I know and love. That’s definitely the place I’m coming from right now, is to lay it all out there.”

Read more of McDougall’s revealing interview in the new issue of AP, out now.