We are a little over a month away from the release of the remastered Tony Hawk’s Pro Skater. Since the video game’s reboot, many diehard fans have been wondering who will be featured on the game’s soundtrack.

Thanks to Noisey, the game’s entire soundtrack is being announced during a virtual concert on Tuesday, July 28. The concert includes performances from Machine Gun Kelly, CHAII, Rough Francis and Merkules.

Now, gamers won’t have to wait much longer to find out. A virtual concert is happening on Tuesday, July 28 at 3 P.M. PST / 6 P.M. EST. During the concert, the full soundtrack is being unveiled. As well, there will be performances from various artists including Machine Gun Kelly. MGK is performing his single “Bloody Valentine,” off of his forthcoming album Tickets To My Downfall.

MGK took to his Instagram story this week to announce his performance for the virtual event. 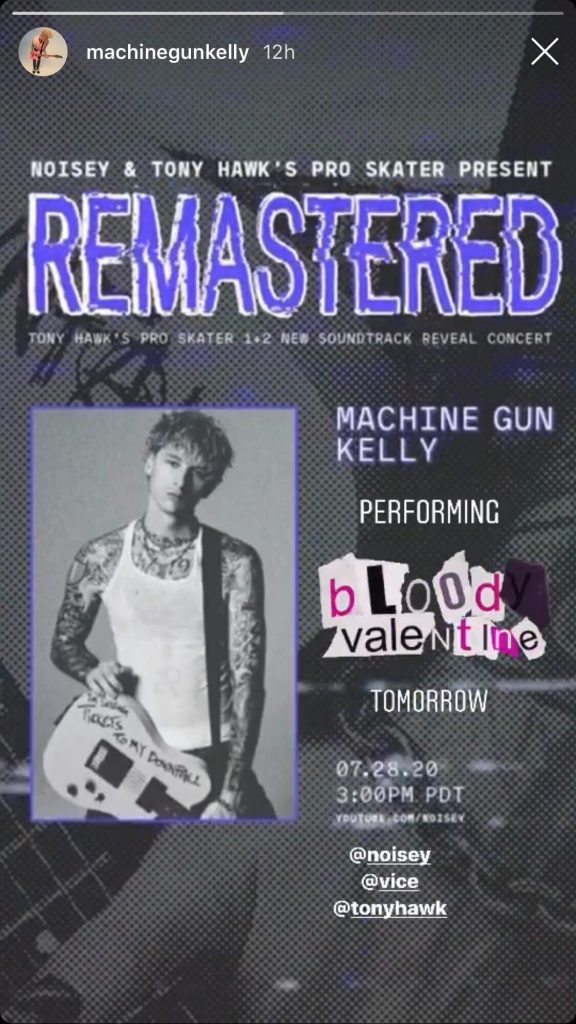 The game’s official trailer confirmed the return of some classic songs. Bad Religion, Dead Kennedys, Rage Against The Machine, Papa Roach and more appear on the reboot’s soundtrack. As well, Goldfinger‘s classic “Superman” is also featured in the new game.

Goldfinger’s “Superman” also inspired the title for the forthcoming Tony Hawk’s Pro Skater 1 + 2 documentary. Pretending I’m A Superman offers a look into how the Pro Skater games came to be and how the franchise’s legacy got its start. The documentary arrives on digital streaming services Aug. 18.

Read more: Here’s why a recent Chainsmokers concert is under investigation

Following the release of the documentary, the remastered game hits shelves on Sept. 4 for PlayStation 4, Xbox One and PC.

For Tony Hawk, he hopes that the Pro Skater reboot inspires a new generation of skaters.

“The original Tony Hawk Pro Skater series is a big factor in the evolution of modern skateboarding tricks and inspiring many of the pro skaters you know and love today,” Hawk says. “I’m excited to help inspire a new generation of skateboarders and gamers—and existing fans—to grow the sport even further.”

Tony Hawk’s Pro Skater 1 + 2 includes some fan-favorite features from the original games. Create-A-Park and Create-A-Skater modes have returned. This time, Create-A-Park will have massive customization options. And the remaster has upped the level of goals and challenges. Players can share parks online with friends and outfit skaters with skill options.

Along with the revamped game, the full roster of pro skaters players will be able to choose from was recently released. From the legendary skaters featured in the original series to new pro skaters, there is now a diverse selection of skaters to play. The new lineup is in efforts to make the game more inclusive and representative of the skating world today.

The game’s official trailer which reveals some of the classics on the reboot’s soundtrack is available to watch below.

What artists do you want to see featured in the new Tony Hawk’s Pro Skater 1 + 2? Let us know in the comments below.