Now, it looks like someone was so desperate to get their hands on the rare instrument that they stole 13 of them.

Shortly after the guitar’s launch, the entire run sold out. Now it looks like someone(s) was so desperate to get their hands on the instrument, they stole a whole pallet of them. 13 of Jones’ guitars are missing after a pallet was stolen out of a Sweetwater Music truck. Of those 13 guitars, four of them are the version that retails for $9,999. The theft occurred on Oct. 30 at the Flying J Travel Center in Whiteland, Indiana.

Phil Rich, the Sweetwater Chief Supply Chain and Merchandising Officer, shares that the Les Pauls were on a truck when they were stolen.

Read more: That rumored Creed reunion could happen, but it might be a while

“Somehow out of a truck full of guitars, this ONE pallet was singled out and stolen at a truck stop,” Rich says in a press release. “Totaling close to $95,000 in guitars, we feel this person(s) knew exactly what to look for and when.”

Gibson executive Cesar Gueikian is asking everyone to keep an eye out for these stolen guitars. It’s possible the instruments could end up in local pawn shops or on re-sale sites such as Craigslist.

“These guitars were the dream guitars of 13 Gibson and Adam Jones fans, who had been patiently waiting for them to be delivered,” Gueikian says. “We have decided to publish the serial numbers of the 13 stolen guitars. [We] are appealing to all of Gibson’s fans to keep an eye out for them and let us know if they surface. Our fans should ask any third-party sellers for a serial number before purchasing to be sure they are not being sold one of the stolen guitars.”

Read more: Apparently Senses Fail and Trapt are disagreeing on which band is better

The serial numbers for the stolen guitars have been made public and are available to see below. Anyone who has information about the stolen instruments should contact Detective Kenny Polley of the Whiteland Police Department at [email protected] or (317) 535-8100. 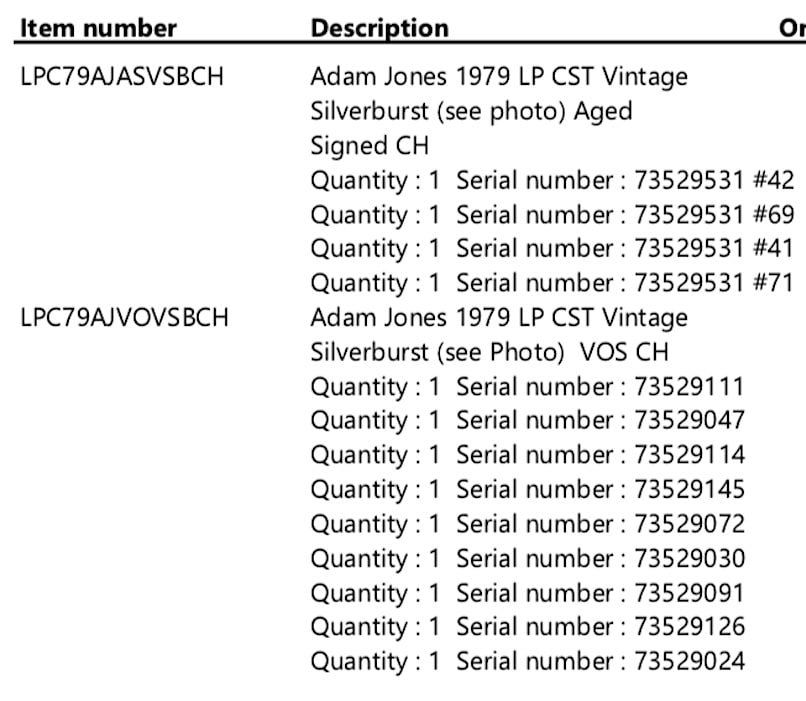 The video for Gibson’s latest collaboration with Adam Jones is available to watch below.

Did you buy one of Adam Jones’ signature Les Pauls? Let us know in the comments below.