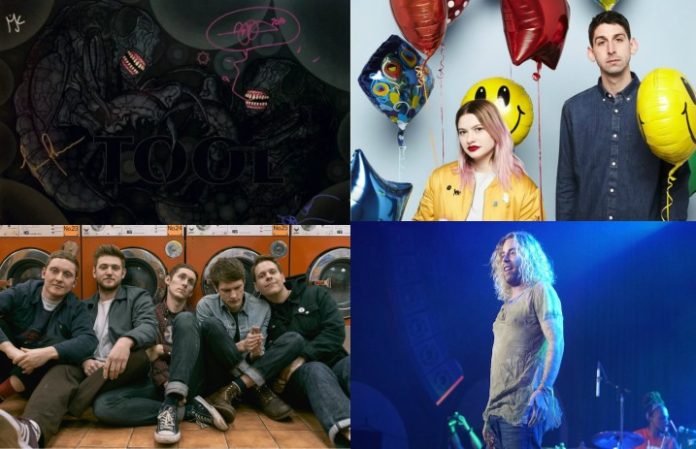 Yep, there's really another Tool show—plus we have new music and videos from Tigers Jaw, Homesafe, and Basement! Check out all the news you might have missed today below!

Read More: Fronzilla, Ben Bruce announce clothing collab and other news you might have might have missed today

With his latest album Movie coming out just last month, Mod Sun has followed up his release with a music video for one of the singles.

“Beautiful Problem” features gnash and Maty Noyes who are both on the rise in the industry as well.

“’Beautiful Problem’ is very special to me because it's really the first time I've written about love and relationships,” Mod Sun says. “I really felt it was important to have both sides represented in this song—male and female.”

Enjoy the new video, and check out the full list of Mod Sun's Drive In Movie Tour dates below!

2. Tool have added yet another date to their spring tour!

Tool will play a special show on the outskirts of Los Angeles Saturday, June 24, and they'll be joined by some big names.

Melvins are scheduled to open at this one-off show, and The Crystal Method will also perform a DJ set. A “special guest” is also listed on the bill, so we'll have to look out for who else will be added.

The show will take place at the Glen Helen Amphitheater in Devore, CA, and tickets will be on sale this Thursday, April 13 via Ticketmaster.

Tool have now officially announced a few dozen dates, all of which you can check out below! We can only guess how many more are yet to come as we await their follow-up to 2006's 10,000 Days.

3. Homesafe have debuted their music video for “Float Away.”

Off of their brand new EP Evermore, Illinois' Homesafe have put together a new production for “Float Away.”

The video was directed by Michael Rumchaks and Calen Smith.

The guys will be touring with Free Throw and Heart Attack Man beginning later this spring.

4. You also have to check out Basement's new video for “Promise Everything!”

Since signing to Fueled By Ramen last month, Basement have released the deluxe reissue of the album and now the title track has a video.

“Promise Everything” was directed, edited and shot by the band’s own Alex Henery with additional camera ops handled by Basement’s Andrew Fisher and Ronan Crix.

The video was shot in the United Kingdom, and premiered over at Clrvynt, where they also conducted an in-depth interview with the band.

Basement are currently out on tour with Thursday and Touché Amoré. You can see a full list of dates below!

5. Tigers Jaw have revealed a new song from their upcoming album, spin.

Brianna Collins and Ben Walsh are back with their new single, “June,” which premiered today over at Nylon.

The tune is about friendship, and Collins wrote it about her actual bff Nikki.

“There was a time in our friendship where she was in a relationship that was emotionally abusive,” Collins says, “which was really hard to see her go through. While she was always a strong and independent person, she leaned on myself and our group of friends to help her get through it all. In the moments where she couldn’t see past everything that was happening, I would try to remind her that it wasn’t always going to feel so bad. I wanted to write a song that showed how friendship can make a difference in feeling strong enough to leave relationships that are damaging.”

Check out the new song from Tiger's Jaw below! Their upcoming album spin will be available on May 19 via Black Cement Records.

6. Okilly Dokilly will be heading out on a spring tour!

After releaseing their debut album Howdilly Doodilly last November, the Ned Flanders-inspired metal act is taking their show on the road.

Okilly Dokilly is almost surely hitting your part of the country, as they'll be playing shows from April until July—joined by Black Sabbath and McDonald's lovers Mac Sabbath.

Check out the dates below, cause you know you want to see them live!

The fifth installment of New Found Glory's studio series is here! Check it out below.

Their forthcoming album Makes Me Sick will be out on Hopeless Records April 28! So only a few more weeks left!!