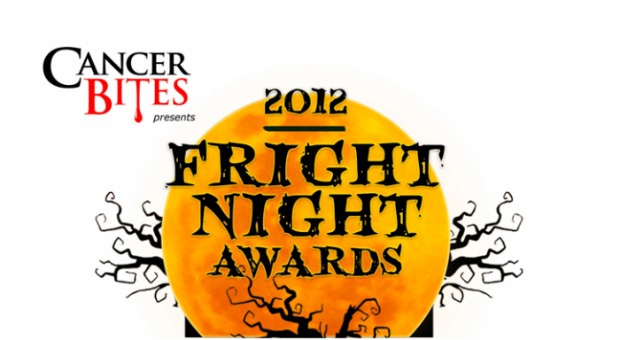 Cancer Bites, a national blood cancer awareness and education campaign launching on Halloween, announced their nominations for the first annual 2012 Fright Night Awards earlier this week in which fans from all around the world can vote for their favorite frights in 21 categories that encompass film, television, celebrity costumes and more. The Fright Night Awards is a virtual awards show held exclusively online. Fans can vote for their favorites at frightnightawards.com.

Going into the final few days of voting, the competition is really tight in each 2012 Fright Night category. Below are the top contenders:

Favorite Scary Movie of the Year (2012): The Woman in Black, Paranormal Activity 4

Favorite Actor I would like to “Sink my Teeth Into”:  Robert Pattinson, Johnny Depp

Favorite Actress I would like to “Sink my Teeth Into”:  Mila Kunis, Scarlett Johansson, Angelina Jolie

Favorite Series of Horror Movies of all Time: Nightmare on Elm Street, Scream

Harnessing the Halloween season and the public's obsession around the mystique of vampires and the supernatural,  Cancer Bites has assembled a powerful team of partners, experts and spokespeople to educate the public about the prevalence of blood cancers. Cancer Bites will focus on raising awareness around those most impacted by the disease and creating a broad national dialogue on the importance of funding life-saving research. Robert Pattinson introduced the concept at the 2011 Teen Choice Awards in his acceptance speech for his “Choice Celebrity Vampire” that was dedicated to the Cancer Bites cause.

Despite the fact that every four minutes someone will be diagnosed with a blood cancer and that collectively blood cancers make up the fourth most common cancer type overall, blood cancer lags far behind other cancer education initiatives on the public awareness scale. Cancer Bites is aiming to change that and has enlisted the Leukemia & Lymphoma Society (LLS),  Lymphoma Research Foundation (LRF) and the Multiple Myeloma Research Foundation  (MMRF) to help fuel its mission.

You can visit frightnightawards.com to vote for your favorites in each category.