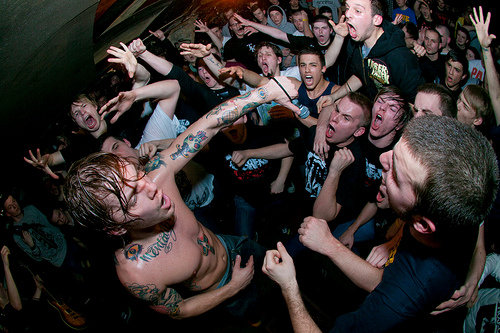 Baltimore's Trapped Under Ice have posted an extensive update on their status as a band via Facebook. Essentially, the hardcore torch-bearers will enter a lengthy hiatus after This Is Hardcore festival in August, while performing at scattered tour dates leading up to that. Read what the band had to say in full:

“Hello World. TUI here. We're writing to give everyone an update on the future of the band. Let's get straight to the point: Beginning in August 2013, Trapped Under Ice is going on a pretty lengthy hiatus. We are NOT breaking up. This is by no means the end of TUI. We just decided that it was important to keep the band fresh and something the five of us enjoy. We don't wanna spin the wheels for nothing and just write music because we feel like we have to. We don't really feel right about just putting out another record for the sake of touring right now. So, while its still fun, we're gonna go on a little break, do all our own things, then take it from there.

At this time, we just want to emphasize that TUI, as a band, and as people, all still love hardcore and punk music. We all play in other bands and still tour. More importantly, we're five people who still love each other and love playing music together. None of that has changed. We've been around the world and back a couple times together and all grown a lot as individuals in this band. Made amazing friends and played with some of our favorite bands. We just wanted to keep it honest for people that have stuck with us through thick and thin over the years. There's no beef, no drama. So anything you hear or read thats not in these paragraphs is 100% NOT true. After a lot of deliberation, we just all felt it was a good time to step back, take a breather, and get a fresh perspective on things.

So, with that being said, we aren't going on hiatus just yet. We still have a bunch of shows in the next six months, including a California weekend, a show in Hawaii, United Blood (Richmond VA), New England Metal Fest (Mass), Groezrock in Belgium (our one and only mainland European show), a UK tour with our friends Backtrack, Canada, and shows in Baltimore and DC. Wrapping it up this summer at This Is Hardcore Fest in Philly, for what will be our last show for roughly a couple years (2015). We'd love for everyone to come out and have fun.

Here is a full list of our shows. It is not likely we will be adding any shows between now and then so if you plan on seeing us anytime soon, this is it.

Groezrock Fest in Belgium (our only mainland European show)
4/27

This Is Hardcore
August 8-11