This week, various Parler posts emerged alleging that Trapt have kicked out frontman Chris Taylor Brown due to his far-right views.

Now, the singer is responding to the speculation he and Trapt have officially parted ways.

Read more: You can spend New Year’s Eve with Post Malone and plenty of Bud Light

It’s definitely been an eventful few weeks for Trapt. After Chris Taylor Brown shared a pro-Proud Boys post on social media, Trapt’s Facebook and Instagram accounts were removed. Then, more recently, Brown found himself in hot water with Twitter.

Earlier this month, he posted a series of tweets publicly defending statutory rape. The controversial tweets eventually led to Twitter suspending the band’s account. Since then, Brown has been using Parler to get information out to fans and publicly talk more about his far-right views.

For those of you that don’t know, Parler is a “free speech” social media platform that is heavily used by Donald Trump supporters. So, naturally, it’s no surprise that Brown has flocked to the platform in recent months.

Read more: We are closer to finding out what MOD SUN and Avril Lavigne are teasing

Then, this week, new Parler posts emerged alleging that Trapt have parted ways with Brown due to his far-right views which have caused their other social media platforms to be removed.

The Parler account @traptparler shared a lengthy statement announcing that they have parted ways with Brown.

“We have officially parted ways with @ctbtrapt,” the post says. “Unfortunately, there were some viewpoints that were said that we do not agree with and it was negatively impacting the rest of the band. We wish him well and hope he can find the help he needs.” 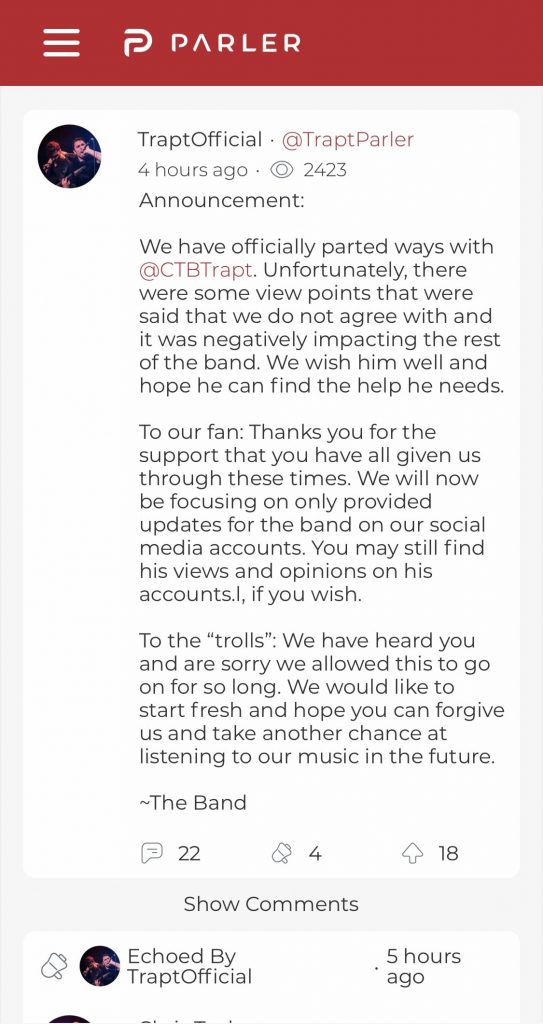 Read more: See why Bella Thorne’s OnlyFans controversy is getting brought up again

“Wow….are you fucking kidding me,” the post says. “What the fuck do the pussies think they are going to be able to accomplish without me? They are going to have to change their name. Good luck finding another singer as good as me. Stupid bitches!”

The Brown Parler account goes on to say that he plans to sue Trapt for the decision. As well, the account shared another post stating that “I will not apologize for being better than everyone!”

Read more: Here’s how ‘The Grinch’ caused Taylor Momsen to pursue a career in music

As it turns out, however, all of these posts are fake. At this time, the only verified Trapt-affiliated Parler account is @CTBTraptParler which is Chris Taylor Brown’s real profile. After the fake posts spread across the internet, Brown took to Parler (the only social media platform he really has left) to say that the news isn’t true.

“Trapt is something I started when I was 16 and I practice what I preach in my lyrics, unlike just about the entire music industry,” he says. “You are all sheep.”

He also posted a reminder to his Parler followers that @CTBTraptParler is the only verified Trapt account.

“Again, this is the ONLY Parler account where you will hear about anything going on with Trapt…if it wasn’t said here, it’s not real.”

So, it looks like Chris Taylor Brown is still the frontman of Trapt after all. Trapt’s Instagram, Facebook and Twitter accounts have yet to be reactivated. For now, it appears Trapt will be using Parler as their main way of getting information out into the world.

What are your reactions to the rumors Chris Taylor Brown was fired from Trapt? Let us know in the comments below.