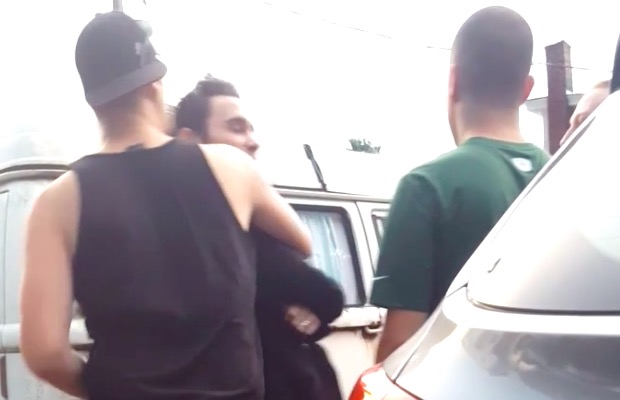 Remember Trapt? Actually, here’s a better question: Do you remember “Headstrong?” That’s what I thought.

In 2002, Trapt took rock radio by storm with their smash single, “Headstrong,” which had everyone bobbing their heads along to beefy, nu-metal-tinged riffs and a chorus that got lodged so far in your head, the band managed to tour off of it for the next 12 years.

Yesterday, Trapt played a show at the Stanhope House in New Jersey. One of the opening acts, Too Far Lost, got into a verbal altercation (which almost turned physical) with members of Trapt outside of the venue. According to Dangerkids frontman Andy Bane, Trapt told the local group they couldn’t sell their merch at the show, and then called them fat, worthless and that because they’re a local band, they don’t matter. (Dangerkids and Too Far Lost seem to be friends.)

Bane took to Trapt’s Facebook page earlier today to voice his displeasure, saying, “You make a post about bullying and then an hour later tell one of your openings bands (who were required to sell tickets to your shitty show) that they can't sell their merch? Call them fat and worthless and ‘you're in a local band you don't matter?’ Sorry “Headstrong” hasn't been relevant in over 10 years. Maybe you should hang it up.”

Of course, Trapt responded in a fit of nu-metal anger. “Worry about your own band and your own career and maybe writing a song that people like. Our one Top 40 hit, that was the biggest alternative song of last decade, is one of our 12 songs that crossed at least the top 20 in rock, so I guess you can only have a hit if [it’s] on pop stations in your opinion. Douchebag.”

The band later returned for more. “‘Headstrong’ makes more money yearly than you've made in your whole life. You're so dangerous… No one said they can't sell merch. That band wanted 3 fucking tables and we wanted our main support to have at least 1 table. That girl in the video bitched and said then we will take our stuff and leave and we said go ahead and then that local band said if they didn't go out and sell tickets than no one would be at the show, all 20 tickets they sold. The second local was [way] better and did a much better job promoting the show and selling the [tickets]… We rely on hard working local bands to promote Trapt when we come to town. Fuck you! See you out there sometime!

Surprisingly enough, the thread has yet to be taken down. If you have some time to kill, check out the whole ordeal below.