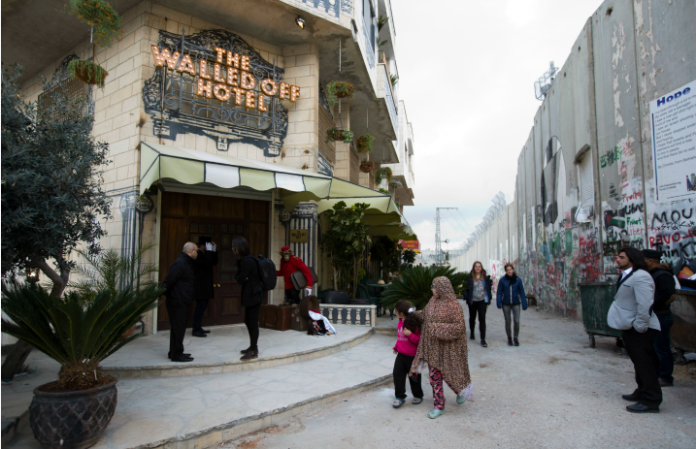 Banksy has made quite the name for himself whether it's through his powerful messages portrayed through grafitti or with his unique art installments like “Dismaland” which was described by Banksy as a “family theme park unsuitable for children.”

Now the artist has teamed up with Trent Reznor, Hans Zimmer and Elton John to open up The Walled Off Hotel.

The Walled Off Hotel's FAQ explains the wall by writing, “It divides the nation of Palestine from the state of Israel and restricts movement between the two for citizens of both sides. Depending on who you talk to its either a vital security measure or an instrument of apartheid. Its route is highly controversial and it has a dramatic impact on the daily lives of a lot of people. The one thing beyond dispute is that everything here is under dispute.”

The hotel will also feature a shop entitled, “Wall-Mart” which is “the graffiti supplies store which stocks everything you need to make your mark and offers expert local advice and guidance,” for any guests looking to leave their mark on the wall.

Elton John played remotely at the piano bar during the opening party of the hotel where he offered his love and peace to everyone in the bar. Despite not being there physically, the piano keys moved to the music Elton was playing. Check out a clip below.

Banksy opened the hotel this year because, “2017 marks a hundred years since the British took control of Palestine and helped kick start a Century of confusion and conflict.”

However, the page also makes clear that the hotel isn't anti-Semitic, writing, “The Walled Off Hotel is an entirely independent leisure facility set up and financed by Banksy. It is not aligned to any political movement or pressure group. The aim is to tell the story of the wall from every side and give visitors the opportunity to discover it for themselves. We offer an especially warm welcome to young Israelis. Absolutely no fanaticism is permitted on the premises.”

The hotel will feature an art gallery, a museum, and a piano bar with a piano that plays itself.

“Our remote controlled mechanical baby grand has been programmed with a bespoke score of contemporary arrangements, plus every night it will play back a concert recorded exclusively for the hotel … Upcoming artists include Trent Reznor and Atticus Ross, Flea and Hans Zimmer.”

Interested in spending the night at The Walled Off Hotel? Reservations will begin Mar. 11 at 9 a.m. GMT where rooms will begin at $30 a night.