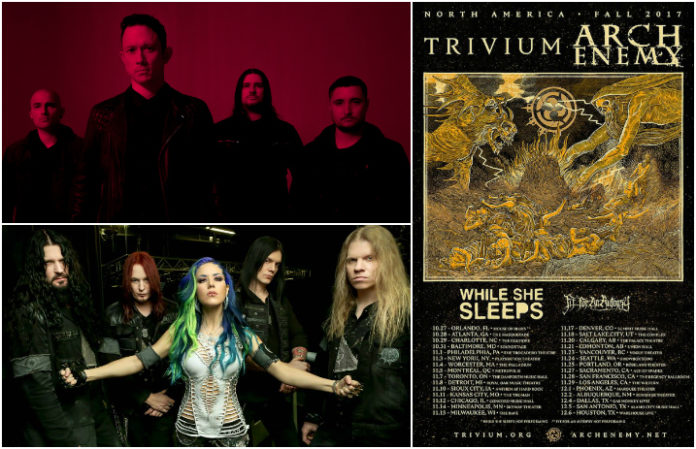 Trivium and Arch Enemy reveal fall dates for a co-headlining tour, Diet Cig perform a Tiny Desk Concert, and Gone Is Gone drop a bizarre new music video! Check out some of the news you might have missed today below.

Read more: Citizen premiere music video for “Jet” and other news you might have missed today

Trivium and Arch Enemy get the lead out

Trivium and Arch Enemy will tour the U.S. this fall with While She Sleeps and Fit For An Autopsy! Check out the complete list of cities and dates below.

“We've been joining forces with Arch Enemy for over a decade now,” say Trivium. “From Ozzfest 2005, through arenas across the U.K., Europe, and Australia on The Black Crusade. This next chapter is going to be one for the ages: Trivium, Arch Enemy, While She Sleeps, and Fit for an Autopsy!!

Read more: Listen to Trivium's explosive new track “The Sin And The Sentence”

Diet Cig stop by NPR's lauded Tiny Desk Concerts series to perform their tracks “Sixteen,” “Tummy Ache,” and “Harvard.” Check it out above!

Gone Is Gone get creepy

Gone Is Gone (featuring members of Mastodon, Queens Of The Stone Age, and At The Drive In) unveil their truly weird new video for “Echolocation.”

Motionless In White want you!

Los Angeles – Do you want to be a part of our new music video? Email your name + age to [email protected] pic.twitter.com/lAPHnFeAer

Motionless In White want you to be in their new music video! Check out the application details in the band's tweet.

Read more: METZ get creative with pancakes in “Acetate” vid

Dead Heavens (Quicksand, Cults, White Zombie) have a new, exploitation film-esque vid for their song “Away From The Speed.”

The Major Minor get major

Detroit pop-punkers The Major Minor have announced a September tour on the back of their recent EP, Different Light (Imminence Records). Check out the band's dates on the In Pop Punk We Trust Tour down below.

The Rocket Summer performed live over at Billboard for the Billboard Live series on Periscope! Re-stream the show right above.