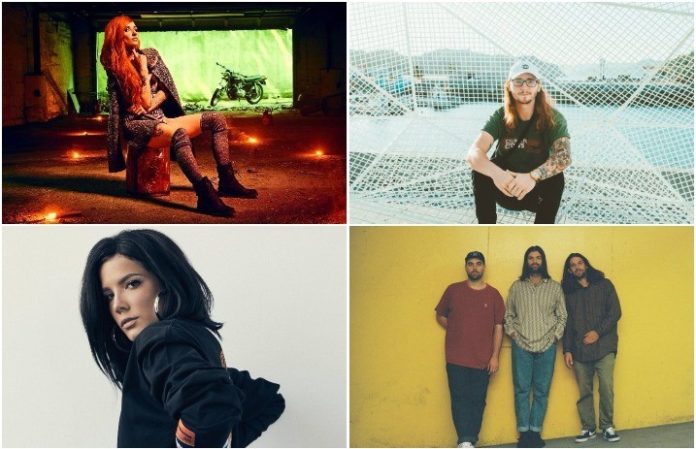 Catch Turnover, Halsey, Silverstein, Lower Than Atlantis and Catfish And The Bottlemen on tour—plus, hear new songs from Super Whatevr, Speak Low If You Speak Love and RIVALS. Check out the news you might have missed today below!

Read more: Everything coming to and leaving Netflix in January

1. Turnover have announced a North American headlining tour for next spring.

Camp Cope and Summer Salt have been announced as support, and tickets go on sale this Friday.

Plus, she’s bringing Kehlani along for the party!

3. And in other Halsey news, her and G-Eazy performed their song “Him & I” live on Jimmy Kimmel Live.

The duo recently released their collaboration, and we’ve been jamming it ever since.

4. Lights shared a behind-the-scenes look at how she made the whole project of Skin&Earth.

She explains how the comics and music work together, and you can see it all come to life on the We Were Here Tour next year.

The track is taken from his upcoming album Nearsighted, due out January 19.

6. RIVALS debuted a music video for their new song “Moonlit.”

The track is taken from the band’s debut album Damned Soul, due out February 2.

7. Super Whatevr debuted their new song “Kathrin With A K.”

The mellow-vibing new track is taken from their new album Never Nothing, out January 19.

8. Story Of The Year debuted their new music video for “Bang Bang.”

The track is taken from the band’s album Wolves, which was released December 8.

This tour is going to RULE! We can't wait to tour with our old friends @cbktweets!

The band will be joined by Comeback Kid, and tickets go on-sale Friday, December 15.

10. Milk Teeth, Boston Manor and THE FAIM have been announced as support on Lower Than Atlantis’ forthcoming UK tour.

We are going to have @MILKTEETHPUNX , @BSTNMNR and @thefaimofficial will be joining us on tour. We've never been out with these guys so make them feel welcome and get ‘em quick! Tickets available here: https://t.co/rduIfIVtDG pic.twitter.com/Rcnttr37lF

The tour is set to take place next April and May, and it’s going to be epic.

11. Catfish And The Bottlemen announced two special outdoor gigs for 2018.

They’ll be playing Newcastle in May and Cardiff in July.

12. PRAYERS released a music video for their single “Edge Of The Blade.”

The track is taken from their new album Baptism Of Thieves, out now.