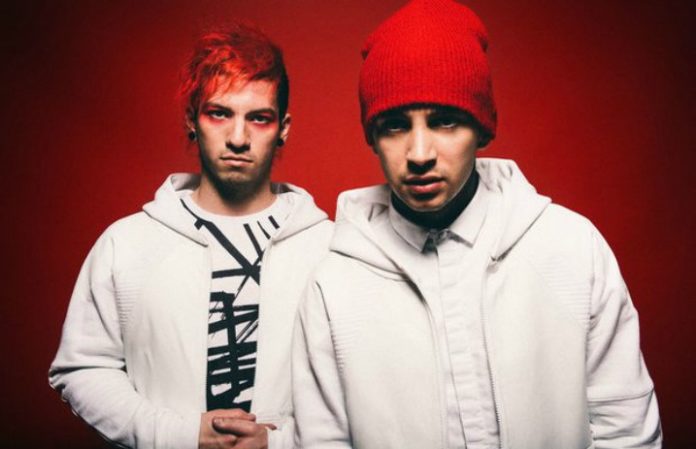 Twenty One Pilots sent fans into a frenzy late last night with their most recent update to the DEMA website—a distorted 8 second song clip that, within minutes of its release, almost broke the internet.

Read more: Twenty One Pilots were once booked to play Warped Tour

Last July, Twenty One Pilots announced their hiatus by posting assorted lyrics and a photo of a closing eye.

It’s been a very long and very quiet hiatus for the Clique, at least until the DEMA website was uncovered back in April. The website contained numerous cryptic posts, letters and file names scattered throughout the site, and the Clique immediately went to work deciphering the cryptic clues left by the dynamic duo.

While theories of the album’s release date began circulating, the clues slowly began to die out, leaving the Clique stuck at a dead end with nothing to do but wait.

Last night, almost a year after the hiatus began, a distorted 8 second clip appeared on the DEMA website. Fans were quick to jump on the new clue, immediately getting to work on deciphering its meaning.

here it is pitched up and played normal then in reverse. the issue is how distorted it is. but ladies and gentleman, almost a year later, we have tyler singing. i’m shaking right now. pic.twitter.com/tCQuUrkr1g

HECK I AM CRYING THAT HAS TO BE TYLER FRICK pic.twitter.com/l2J2eds1er

It should be noted that it sounds like "Bienvenidos" not "Bienvenido".

So it is inferred that he is referring to more than one person.
…
To the clique???

between that and “you look lost”

.@taxicaib is fluent in spanish and hears "We are lost". i made the connection, polarize has the spanish lyric "domingo en fuego" and a big part of the song is "you'll have to come and find me", they are lost and we have to find them???

The file name for the distorted clip is listed as “_ _ n_ot_myo_nly_fri_en d” which sparked a new theory that actually makes a lot of sense.

there are 7 dashes. seven days from now is july 6th, a year since the day the eye was closing. also, note the space between en and d. you can interpret this as fri and end being two different words instead of friend. friday = the end of the hiatus. july 6th is a friday. be ready. pic.twitter.com/g1BZFKQmIj

It was also noticed that TOP deleted all the eye photos from their Facebook page, with the exception of the cover art. Reports were also made that Tyler liked, then unliked, a photo on Instagram.

a man is alive. pic.twitter.com/wA01eT1J0K

The discovery was also made that two new TOP songs titled “Jumpsuit” and “Nico and the Niners” are now listed in two different music databases.

another discovery by the wonderful people over at the @DiscordClique. the two songs ‘jumpsuit’ and ‘nico and the niners’ are now appearing on different ISRC music databases. if you were doubting their authenticity, you should believe right now. these are two REAL songs. pic.twitter.com/KXmtQ40TmD

If that isn’t enough to give you hope that the hiatus could finally see its end, then head over to StubHub and search Twenty One Pilots. The search brings up one event, Lollapalooza Argentina 2019 which is set to take place in March.

While it’s a lot to take in, it should also come as no surprise within minutes of the discovery of the distorted clip, TOP began trending on Twitter.

one distorted eight second snippet got tøp on the trending page. the internet will be destroyed when they release a song pic.twitter.com/SHSOA2Mpom

Could the hiatus be over this Friday? What do you hear in the cryptic, distorted sound clip? Let us know your thoughts on this latest theory, below!