Earlier this week, we found out twenty one pilots were going to be releasing a new song soon and according to a post from Tyler Joseph, it’s coming tomorrow.

He revealed a photo on Twitter of a USB with the caption “song and video tomorrow” confirming the news.

On April 5, Joseph posted something a bit cryptic saying “always writing, but this one feels like it should just come out now.”

He quickly followed it up with some more details saying this is the first song he’s ever written on an electric guitar. He followed that up with a message to fans to wait a few days while he cleaned the track up.

Proceeds for the song will also be going towards people working in the music industry that are out of a job. AltPress reported about Crew Nation, last week as Live Nation’s charity benefit fund to aid tour crews and others afflicted and out of work due to the coronavirus pandemic.

first song i ever wrote on electric guitar.
i think it’s simple but hopeful.

give me a few days to finish it up.
a good rule of thumb is to never give yourself a deadline so tweeting about it kind of just added pressure, it’s not done yet.

i also want a portion of whatever money this song makes to go to this charity i saw called crew nation. it provides funding for people who work in the live music industry who don’t have a job right now.https://t.co/K3XZJxrWs8

no one knows when live music will get back on its feet. i’ve met so many amazing people working venues and touring with bands. hopefully we can do something to help some through this song.

Now, we’re seeing that he wasn’t lying about the new song.

He posted a photo showing a USB stick wrapped in yellow tape with the words “Level Of Concern” written on it.

Are you excited to hear a new twenty one pilots song? Let us know what you’re expecting in the comments below. 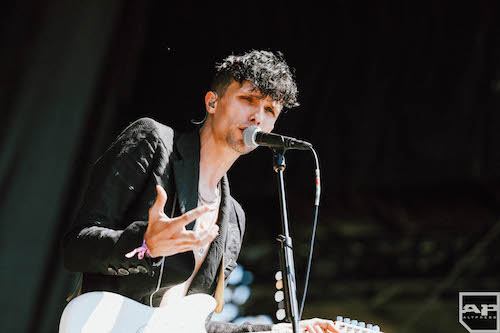