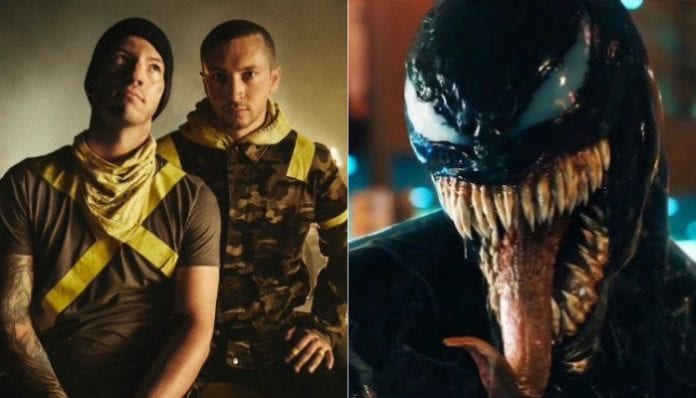 It looks like moviegoers in the U.K. are getting an eyeful of twenty one pilots ahead of screenings of Venom! According to Rock Sound, some of TØP’s latest vids are running ahead of the new Marvel movie in a few British cinemas.

That means Marvel fans are seeing clips such as the pilots’ recent “Jumpsuit,” “Nico And The Niners,” “Levitate” and “My Blood” videos in places like Manchester, Leeds and Southampton, as well as Cardiff, Wales, and Glasgow, Scotland.

Read more: Taylor Swift breaks her political silence after all these years

Can someone transport this magnificent idea across the pond? We sure would like to watch some awesome twenty one pilots music videos instead of seeing the usual advertisements that run ahead of a feature film in the movie theater.

How did Sony’s new Marvel Universe picture end up being so scene-heavy, anyway? We previously reported on an apparent hint toward Panic! At The Disco that’s buried on the Venom soundtrack. Does Venom write sins, not tragedies?

Venom the most violent Marvel movie?

And the new movie may be the most violent in the Marvel canon, says the movie’s director. In the film, Dark Knight Rises alum Tom Hardy stars as investigative journalist Eddie Brock, who transforms into the the titular alien symbiote antihero.

Speaking at a recent Comic-Con panel, Venom director Ruben Fleischer specifically cautions there are “no heroes in this movie.” He says Marvel fans should expect a “much grittier, grounded, complicated character” in Hardy’s Brock/Venom.

Did you catch Venom in theaters yet? If you’re in the U.K., have you seen any twenty one pilots videos showing before the new flick? Sound of in the comments and let us know! And read more about twenty one pilots in the new issue of AP: