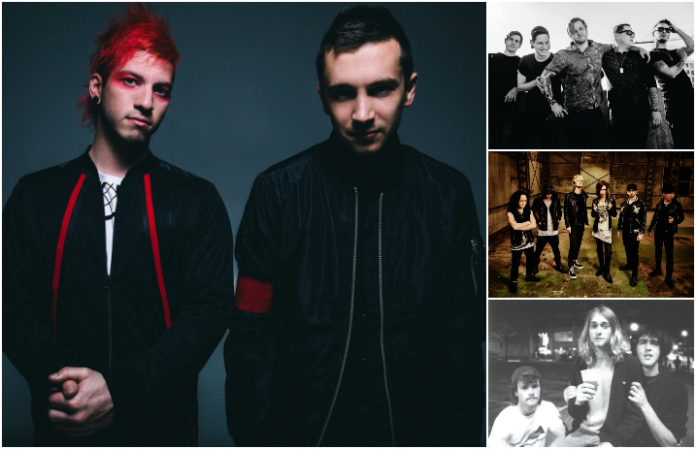 Twenty One Pilots give a final look at their Sleepers documentary series, Lakeshore premiere a new song, and I Promised Once sign to Needful Things Records. Check out some of the news you might have missed today below.

Read more: Saosin’s Beau Burchell recording with Senses Fail and other news you might have missed today

Twenty One Pilots get gone

Twenty One Pilots unleash the fifth and final installment of their Sleepers tour diary video series, entitled, “Goner.” Check out the clip, above, as 21P show off some awesome footage from their recently concluded Tour de Columbus.

I Promised Once get signed

Needful Things sign I Promised Once! Check out the “borderless metalcore” band's lyric vid for “Succubus” above. “We are looking forward to growing together and delivering our music to fans around the world,” says guitarist Nils.

For your ultimate dose of grunge nostalgia: SPIN unearth a complete 1988 video of (pre-Dave Grohl) Nirvana performing inside a RadioShack store, the band attempting to film a music video for one of their early demo songs.

Monroe light up the street

Monroe share new track “Streetlight” from their upcoming debut EP, The Streetlight, out July 28. Monroe, the musical project of singer and saxophonist Matt Berman, play on July 15 at The Bowery Electric in NYC—get tickets here!

Liam Gallagher, as he is

Former Oasis singer Liam Gallagher unveils the music video for “Chinatown,” the second tune to be released from As You Were, his forthcoming debut solo album. As You Were comes out on October 6 from Warner Bros. Records.

Milk Teeth rock an acoustic rendition of their new song “Hibernate.” The studio version of the track will appear on their upcoming EP Be Nice, which comes out on July 28 via Roadrunner Records. Get in on the exclusive pre-orders here.

Insane Clown Posse have revealed the full lineup for the 18th annual Gathering Of The Juggalos this month in Oklahoma City (the event features P.O.D., Vanilla Ice, the Bloodhound Gang, among others). Check out the “infomercial” above!

Read more: Insane Clown Posse are being sued for plagiarizing poem from 'Chicken Soup For The Soul'

Prince and Justin Timberlake drummer John Blackwell Jr. died on Tuesday at the age of 43. The prolific percussionist joined Prince's the New Power Generation in 2000 and played with the Artist for 15 years. (via Entertainment Weekly)

Comeback Kid and Every Time I Die announce tour

Comeback Kid and Every Time I Die are hitting the road this fall for a European tour with special guests Knocked Loose and Higher Power. Check out the full list of cities and dates directly below! (via TeamRock.com & Rock Sound)

Riot Feast Menu is off the chain

Check out the full menu for The Riot Feast at this year's Riot Fest! The glorious food puns therein know no bounds: For dessert, you can take your pick between an emo-rrific “Taking Back Sundae” or, um, “Paramoreos.” (via Eater Chicago)

Watch more: APMAs 2016: TWENTY ONE PILOTS win Album Of The Year for 'Blurryface'