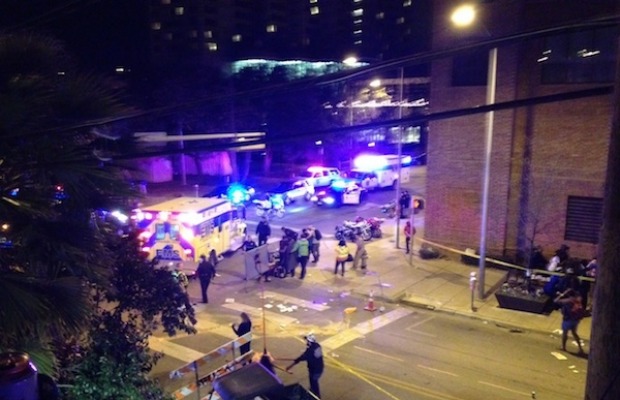 Early this morning (approximately 12:30 a.m.), a driver crashed into a crowd of people at the South By Southwest festival in Austin, Texas, killing two people and injuring another 23. The driver was apparently fleeing a DUI checkpoint while being pursued by police.

According to Austin chief of police, Art Acevedo, the two people killed were on a moped that was struck by the driver after he plowed into a group of people gathering outside the Mohawk for the House Of Vans showcase.

After being stopped at the DUI checkpoint, the driver maneuvered through a series of parked cars, then gunned it at a high speed, driving the wrong way down a one way street. He then made a turn onto Red River Street, crashing through a barricade and into the crowd.

After stopping the vehicle and fleeing on foot, the driver was chased by police and eventually tasered then taken into custody.

Five of the injured are in critical condition. The driver, who has yet to be named, is facing two counts of capital murder and 23 counts of aggravated assault with a vehicle.

Apparently, the crowd gathered outside the Mohawk were waiting for Tyler, The Creator’s set. The rapper tweeted after the incident:

Below, you can watch graphic footage from directly after the incident.

UPDATE 3:30 P.M. EDT: CNN is reporting that as of late this morning 15 of the 23 people hospitalized have been released, while two patients remain in “very critical” condition; three are in serious condition; and three others remain in the hospital with non-life threatening injuries.

The following statement was posted to SXSW’s official website by the festival’s managing director, Roland Swenson:

“Dozens of us were on the scene when the incident occurred and we worked closely with APD to create a perimeter around the area, turning back all the visitors spilling out of the clubs who headed north on Red River Street.

To avoid confusion we plan to carry on with our scheduled daytime events at the Austin Convention Center in order to serve our tens of thousands of participants during this tragic time.

All of the SXSW staff and volunteers reported for their regular duties this morning and will continue working today on the event.

We are contacting all of the venues to find out if they have made any decisions about their operations that might impact our visitors.

Despite all of our preparations for dealing with a major incident during SXSW, nothing could really prepare us for how this feels. As much as we would like to just go home and spend time absorbing the shock of this horrific event, we feel our best use is to continue to operate today.

Our thoughts and prayers are with the injured and with the families of the fatalities.”

In light of the morning’s incident, the Mohawk—the venue where the crowd was gathered—has canceled the Vans sponsored South By Southwest event it was scheduled to host today, with performances from Cloud Nothings, Speedy Ortiz and more.